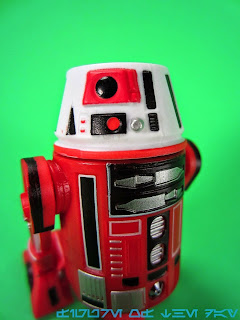 Commentary:  My favorite shape of the new, post-movie domes is the R6-Series Astromech Droid and this is a colorful new one.   I'm not sure that the red body is the best possible match for him that could ever be, but as far as the second wave goes there's really no more appropriate fit than this one, so let's go with it.   The dome is the same mold as last year's round, except now the panels are slightly different - now you've got a mix of red and black markings rather than purple or yellow.   If you don't have an R6 mold, this is as good as any thanks to its unique blending of the trapezoidal cake that is an R5 dome with some of the "facial" details of R2-D2.  This makes it cuter, with a big eye and the little "face" bits but with some tweaking and new colors.   As a new droid, it doesn't have a lot of weight behind it and its appeal to you will largely come from if you think it looks cool.  I do. 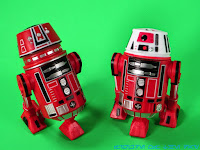 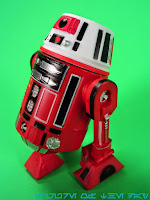 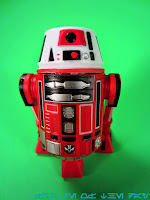 Since we know R6 droids will appear in The Force Awakens - but which ones, we are less clear - this figure might be worth getting as a tangent for that series.  We don't know which droids (if any) will get figures before Hasbro focuses on the next next movie, so getting an R6 droid of any flavor is, at worst, an off-camera purchase.   I love droids so I'll buy them all, and this one is a perfectly decent sum of its parts - but if you have any from the last round, this is hardly essential.

Collector's Notes: I got this from my pal Shannon who was cool enough to get me a set from Disneyland.  This is the only R6 droid in the first 2015 assortment.