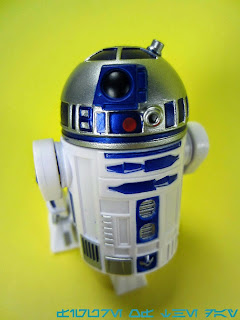 Commentary:  This R2-Series Astromech Droid is why you're probably here - you wouldn't care about R2-D2 repaints if you didn't love R2-D2, and for all intents and purposes this figure is R2-D2.  It's not even the first R2-D2 on the build-a-droid chassis - by my count there are at least 3 now - but this one has a slightly different shade of blue and some newly tooled parts.  The dome is the same form we're used to (or the changes are minor enough), with a bunch of subtle deco changes.  The blue is now more metallic, the red dot is moved a bit, the little boxes on the front are now outlined in blue, but it really gets interesting on the back.  Compared to the previous Disney model (pictured here) you'll see the 2015 version has a red dot on the back as opposed to the 2012 one's yellow, plus a little detail on the side is boxed around rather than filled in.  Minor stuff - but it is worth noting as yet another minor difference for the dome for those of you who really do want everything.  And now let's recycle more of a previous review. 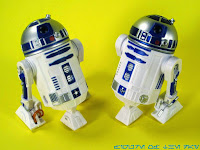 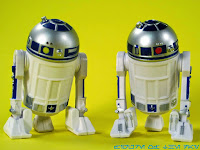 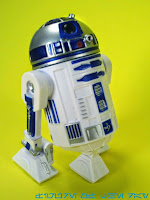 You don't need this figure.   You do not need this figure.  But maybe you love droids, and like me you're going to buy any new build-a-droid parts just because.   It's not different enough to warrant your attention in most cases, but if you see every droid change as a worthwhile addition to your stable you know you need it - which is sort of frustrating.   I see droids like clones - a difference is worthy of another purchase - but unless you see unique lights or changes to the blue as "different" you can probably just be happy with the 2012 Walmart gift set version or the 2012 Disney release.