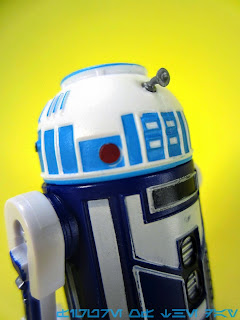 Commentary:  Since Disney teased that these 11 figures are the first part of the next wave, I can only assume that the R8-Series Astromech Droid dome here was meant to go with some other, unreleased body.  As of right now there's no torso in circulation that matches it particularly well.   I stuck it with a blue R7 torso for no good reason.   The white plastic dome marks the third time it has been rendered in this color, but the pale blue panels are new.   It's basically a find-and-replace update of a previous release, but with one fairly nifty departure on the back of the dome - the little projector is blue with a black interior, as opposed to a single color.  Obviously this will mean nothing to anyone, but it does make the figure look a little bit different. 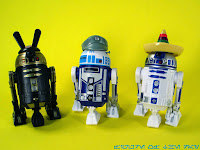 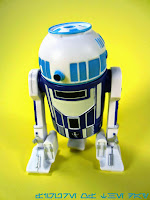 This torso is a retooled R7 body, complete with the filled-in holes.  At first glance that's the only change, but there are enough minor changes where it's clear they did some hefty work or possibly even made an all-new torso here.   Some of the little details are spaced apart differently, and the little silver greebley bit on the front left hand side is completely different.  The "vent" on the right hand side seems to be a slightly different design, but it's also possible some of the differences could be explained by the extensive (and in my sample's case, sloppy) use of paint.  A similarly colored R2 body was used last time, so I expect you might look at it and say "Don't I have that?"  It really is that close - but it's a new body type, so it's different, and different is new around here. 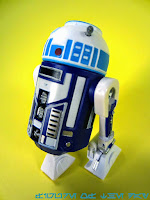 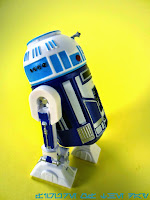 Without an obvious "face" with an eye, the R8 droids feel a little less personable as it is - given the mismatched nature of this figure due to the part selection, it's pretty ugly.  As much as I'd like to say "and I love ugly!" the truth is I'm sitting here hoping that some new colors of body parts drop in a future wave so I can put this dome on a better body.  The dome itself is fine, the body is perfectly nice, but together it's just not pleasant.   I'm guessing this dome may be left over a lot at the parks.

Collector's Notes: I got this from my pal Shannon who was cool enough to get me a set from Disneyland.  This is the only R8 droid in the first 2015 assortment.