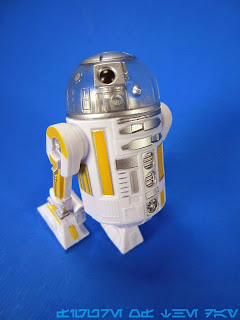 Commentary:  This R3-Series Astromech Droid is really good.  I just wish I had better foresight as to how good it was before I asked my friend to get me droids - it's the perfect dome for this or any series.  The clear colorless head has silver markings, making it the perfect match for pretty much every single body.  It looks good on literally every body I've tried so far - it doesn't clash and it isn't ugly.

As domes go, the clear R3 head is the best in breed just because it's so versatile.  I'd buy a sack of these if I could.  It makes a better R3-M3 dome, and it would be a good base for your future customs.  If you can, get this one.

Collector's Notes: I got this from my pal Shannon who was cool enough to get me a set from Disneyland.  This is the only R3 droid in the first 2015 assortment.

I would love to see this dome on all of the droid bodies if you ever got a chance!