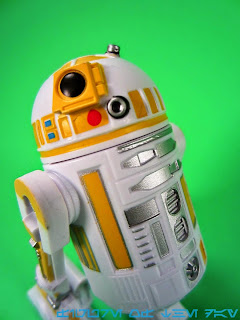 Commentary:  You might think you don't need another R2-Series Astromech Droid - you'd be right - but this one looks really different.   White domes on the rounded R2 model are pretty uncommon, so this one really stands out with its shiny, egg-like form.   (And it looks like more white ones are coming.)   The two-tone black and silver projector pops nicely, as does the red dot under the black eye.   There's really nothing too stand-out-ish here, other than the fact that this is a color combination we've never seen as a toy and unless I'm mistaken, we've never seen this color combo anywhere.   I really appreciate seeing more new dome colors out there, particularly when they really stand out as distinctive takes on popular breakfast foods.   It blends in on a shelf of astromech droids, but alone it stands out as something visually distinctive.  It also doesn't match many of the other bodies too well. 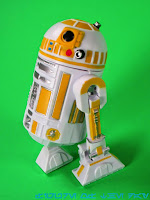 I really like this one because it's so clearly different than the other 100+ droids I've already bought.   I don't have any white droids with round domes that I can recall white droids with the R2-D2 template on a white dome that I can recall, and now I do - so I look forward to seeing what's next, and I hope that these little buggers don't get into the hundreds of varieties.  Because from the look of things, we're getting pretty close.

You forgot about R3-T2 from the Entertainment Earth Exclusive Astromech Droid Set. He has a white dome!

And R2-X2. Both versions of R2-X2 (from the Entertainment Earth Exclusive Astromech Droid Set and from the 2009 The Legacy Collection) both have white domes! There may be more...

I always pictured R2-X2 as black with white in my head, but you're right. But R3-T2 I'll argue mostly because it should've been all red and wasn't.