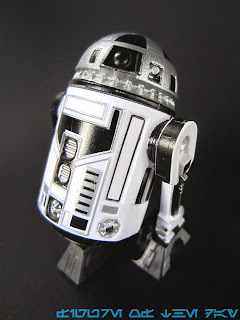 Commentary:  The slightly squished R9-Series Astromech Droid seems like he was designed for this dome to fit on his matching body - it's a nice one.   A sparkly grey plastic dome was lovingly slathered with silver metallic paint, black markins, and even a little red light off to the side.  I daresay this is the best R9 dome you can buy, and given that there are only four so far that's not a huge stretch.  This one really does look like he fell off of a movie set, and it works great with one of the bodies.

The body of this configuration was indeed retooled.  The lower holes on the body were removed, so you can't make a four-armed droid anymore.  The white plastic body has silver and black markings, most of which are painted well.  This sample is a little off on the rectangles on his left-hand side, but there's still a lot of silver to appreciate.    The back of the body is similarly decorated with a ton of black and silver paint - few of the other figures have quite this much deco.   It's not plain, I'll tell you that.

Each leg is new - actually, it's only one leg.   Disney had issues keeping enough matching right and left legs during the 2012 run, so I'm sort of happy that they found a clever solution to the issue.  Each foot has been redesigned so it's the same on the front and the back.  It combines elements from both the front and the back of the feet of the first ones, while retaining the wheels and dropping the wires.  As such it isn't perfect, but it's pretty good.  This pair of legs is white plastic with black and silver highlights.  I should also note that the arm was retooled so that the "rod" and "dots" on each arm have been removed and the "shoulder" has been smoothed out.  Each foot is molded in black plastic, with silver on the sides.  It's quite distinctive and fits in perfectly with the body and its black, uh, "butt."

The central black foot for this (and all the other) colors is now unpainted, while the 2012 batch had silver markings around the bottom of the foot.  It gets the job done.

If you don't have any R9 droids - and even if you do - be sure to buy this one.   The pieces all mesh together perfectly and I don't have anything bad to say about it.  If you read me often, you know that's rare - so get it!  Well, OK, it's hardly essential but it's such a perfect configuration of parts that I can't

Collector's Notes: I got this from my pal Shannon who was cool enough to get me a set from Disneyland.  This is the only R9 droid in the first 2015 assortment.