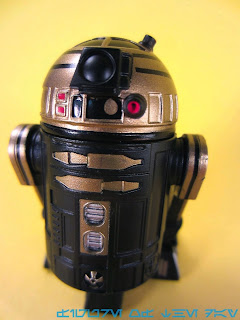 Commentary:  This R2-Series Astromech Droid is something of an oddity because, as of this assortment, many of the figures are obviously meant to represent specific droids.   This one was released as a cartoon figure a few years ago, but with this dome and the body parts you can actually make R3-S6 for yourself!  I'm really pleased with this.   The figure's dome looks pretty good, and unlike  the body it's a dead-ringer for the show.   The gold-on-gold panels are now merely gold, but the black equator around the head remains, as does the red interior to the black holographic projector on his face.  They did a nice job here, molding the head in gold and painting it in gold just to make sure it looks good.   Whoever did this understands how to make a good toy better. 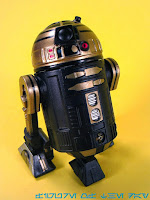 The body of this configuration was retooled.  The lower holes on the R2 body were removed, so you can't make a four-armed droid anymore.  The body color is black, and with a few exceptions it's pretty close to R3-S6.   The two panels under the dome are now gold, instead of glossy black like on the TV show.  I think this looks better, but you may disagree.  Other than that, it's pretty much on the mark - it even has a couple of gold panels near the third leg, like the previous cartoon figure has.  Also, the panels are sculpted slightly differently - if you put them side-by-side, you'll notice the large rectangles on the sides of the front of the body are different depths than the previous release. 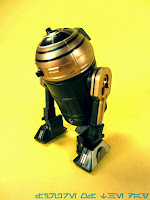 Like the other legs, the new "universal leg" returns here without the wires to make it obvious where the front or the back is.  Gold "toe" panels on the front give it a little personality, but it still lacks the dots and rods on the upper part of the limb and features retooled copyright information to excise any indication of these being Hasbro products.  The sides of the feet are silver with a gold design in the middle, which actually makes them a little more colorful than the original design.  Gold and black stripes on the shoulders are similar to the original designs, and as such should be pretty agreeable to anyone wanting a movie version of this character.

If you love The Clone Wars you just gotta get this one.  You're going to  love it.  It's just a little different from the animation model, but not enough to make me angry or demand a redo.  Should Hasbro try it again and we get a more accurate one, that's still fine by me - I can do something cool with these parts.   Nice job, Hasbro.  (Or at least I think it might be Hasbro engineering...)