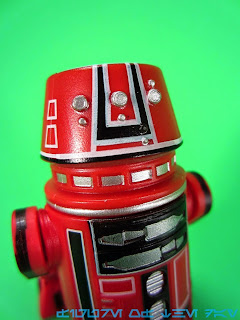 Commentary:  This R5-Series Astromech Droid is, for all intents and purposes, a make-good on the hard-to-find R5-K6 from a few years ago.  The gift set was very expensive thanks to it getting short distribution at some odd venues, including electronics stores and gift shops.  (I actually stumbled on quite a few.)  Point is, he's hard to get - and now Disney has a new version of him you can cobble together using parts out of their bins.  The dome is different than the 2009 figure but it's certainly a close enough replacement given the asking price of the gift set these days.  The red dome has the same black "U" pattern on the face, with the various silver bits being in basically the same place.  The antennae are now missing, but the little white trapezoids are there in a slightly different form.   The mechanism is gone in favor of the hat hole, but overall this is pretty close to the original. 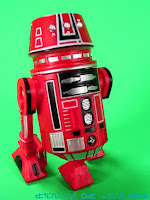 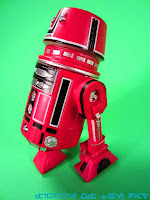 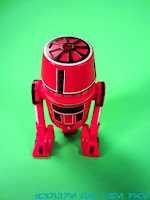 If you missed R5-K6, this is a much cheaper alternative.  Which is kind of disgusting, as the last version got you 2 Rebels and a small vehicle for $25.   If you love your droids, and I hope you do, here's another chance to get one of the scarcer robots in the line at a price that, while not great, is certainly better than fifty bucks.  There's really no other way to configure these parts into something pleasing (other than the R6 dome, which we'll examine shortly) so go ahead and get this one.

Collector's Notes: I got this from my pal Shannon who was cool enough to get me a set from Disneyland.  This is the only R5 droid in the first 2015 assortment.

This little guy looks identical to the battle pack release. I can't see any deco differences.