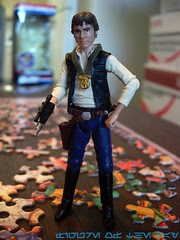 Commentary:  One of the figures Hasbro can't quite seem to get right is Han Solo, mostly because the head sculpt seems to be tricky to get just right.  For this release, Hasbro mixed parts from the 2004 Han Solo and the 2009 Han Solo to get one of the better bodies with one of the worse heads, and then slapped on a medal and called it a day.  As a carded collectible, this vintage figure is low-level acceptable.  The card art is nice, the presentation is good.  As far as authenticity and value goes, this isn't a very good figure.  In the movie, Han's shirt was buttoned up, and I admit it's a minor thing but in the era of Hasbro making new figures to reflect different belts I think getting the shirt right is a pretty important feature.  The head is from the Death Star Escape figure, and is kind of big.  The 2004 Vintage Han Solo is one of my favorites, so I really don't understand why they changed its head for this release.  Oh, one other thing I almost forgot-- the right thigh lacks the brown loop to represent where the holster is tied to his leg.  For sitting purposes, I'm glad they left it off, it looks better as a toy this way.

My last big complaint is value.  Hasbro knows we'll buy pretty much anything on a vintage card and doesn't really concern themselves with keeping the price down-- it's a "premium" item, after all-- and doesn't worry about piece count either.  This figure is very similar to figures previously released with Stormtrooper armor bits and bonus droid pieces, so we know Hasbro could probably have done better.  With Saga Legends and Movie Heroes having included stands and bonus gear, it's just sort of unfortunate that Hasbro went for higher prices on the Vintage figures because they knew we would pay for it.  If the product was a smidgen better, I'd gladly pay $10 or more, but I'd need some better sculpts plus some amazing accessories.   If and when Vintage comes to an end, I'm expecting a return of environmental pieces or build-a-droid to keep fans interested, because a plain figure with a new medal accessory (of which we've had a few already) isn't exactly going to keep fans hanging around forever.

Collector's Notes: The figure was somewhat common and made up one of the token "repaint" waves, although most of the figures had new tooling this time.  You should be able to score one at or under retail price.

It is a misnomer that we will buy anything on a vintage card. And where sales have disappointed Hasbro, they say that the collector market isn't there. Maybe the collector market is still there (fruitlessly walking the unstocked toy aisle), but a bit more discriminating and a little less brainless than they take us for. This is a crap figure and only of interest to people who cannot get their hands on any of the previous releases with a feasible head sculpt.

I am disappointed at the accuracy issues and wish they had just carded it as a "regular" ANH Han with the original headsculpt. This figure sold well in my area though, despite the extreme amounts of this wave hitting around Christmas of last year. I actually saw little kids picking him off the pegs which threw me a little. This was the perfect OT wave for kids really.