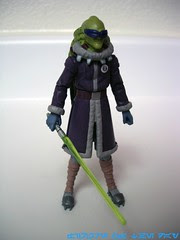 Bio: Kit Fisto fights to free the snow-covered world of Khorm from Separatist control and regain access to a valuable resource. Fisto and fellow Jedi Plo Koon fight the battle droid army and a native warlord in league with the Separatists. Fisto wears crampons to move easily over ice and googles to protect his eyes from blowing snow.  (Taken from the figure's packaging.)

Commentary:  The coloring of this Kit Fisto is actually more comic-like than his siblings.  The green is flat, the eyes seem brown, and the general flare of the CG series just isn't here.  The other animated Kit Fistos have more colorful skin, with the green fading from light to dark and to be honest, the detail of the facial sculpt does look better in molded green plastic than in plastic which is later painted green.  Having said that, I still like the figure for what it is, a rare "Expanded Universe" entry to the TV show.  Based on a pretty neat comic storyline, Plo Koon and Kit Fisto team up to fight walrus aliens with not-yet-Admiral Ozzel.  Because it's cold, they get removable snow shoes, goggles, and all that stuff.

What's particularly interesting about this figure and the companion Snow Plo Koon is how they share a lot of parts.  The torso, upper arms, and legs are basically the same with a new head, lower coat, and lower arms combined with paint creating a new and different figure.  They shipped in different mixes, but all at the same basic time which meant that Hasbro really didn't exactly do great in the distribution realm for these guys.  I did see them in the wild, but they went from having no figures in months to having 3 waves in a week, and those 3 waves just didn't quite get out there in all markets.  (Although I did see them a few times, I guess I'm special.)  Get this figure cheap if you can, since it's a comic-inspired one I wouldn't suggest going crazy for it.

Collector's Notes: At $10ish on eBay, it's not a bad figure for the money.  Plo Koon got repackaged in 2012, but not this guy.   If you have the means, I'd suggest getting one before the price goes up.