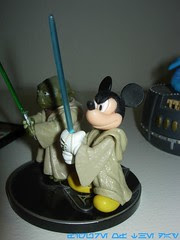 Bio:  Mickey Mouse teams up with Jedi Master Yoda, another small but powerful fighter against the dark forces in the galaxy. With help from the knowledgeable and understanding Yoda, Mickey takes up his lightsaber and joins forces with the other Jedi Knights in their battles to fight evil wherever it is found. Yoda and Mickey prove that nothing is impossible and as Yoda might say, "Do or do not - there is no try" as long as the Force is with you. Come join Mickey and Yoda on their many adventures throughout the galaxy!   (Taken from the figure's packaging.)

Commentary:  That's right, Hasbro did two versions of Jedi Mickey Mouse and this is the first release.  The later one has a darker brown robe, while the first release-- this one-- has a tan one matching Yoda.  A pretty crappy Yoda, at that.   For the purposes of this column, this is (as far as I can remember) one of only two figures which appear in Hasbro Star Wars packaging, paired with other Star Wars-y characters, but are not really of the DNA of the Lucasfilm saga.   This particular Mickey Mouse sports a blue lightsaber, similar to Yoda's, and is sculpted to look either determined, or angry.  He has a robe which seems appropriate to the saga, and big yellow shoes which... well, they go with a lightsaber about as well as his giant gloves.  It's a souvenir, a mascot toy.  It's a non-essential addition to a movie collection, but a neat addition to a Star Tours collection if you like the weird stuff.  Personally I do not recognize its right to exist, but it does, and is it really and worse than that awful red Holiday Darth Vader from a few years ago?  I think not.  With limited articulation, I would say it's an acceptable release and the sculpt really isn't all that bad for a cartoon character of this nature.  It's also notable in that, at least as of late, Hasbro no longer produces most items under the Disney license as that all went to Mattel recently.  So this is one of few-- heck, possibly the only-- Disney mascot action figure produced by Hasbro.  As far as I can tell, the other Star Tours figures sold of Muppet and Disney mascots are developed by another team, not employed by Hasbro.  (Correct me if I'm wrong-- I may be.)

Collector's Notes: The set exists in a few variations, thanks to changes in Yoda's lightsaber (green or blue) and skin (light or dark).  Mickey is, as far as I can tell, unchanged between them.  The set sells for as little as $5 on eBay, but it generally goes for $10-$20.  It's not worth $20.  And yes, I have three versions of it, because I have an emptiness in my soul that's roughly the size of a 3 3/4-inch scale action figure.

While I love me some Jedi Mickey (the Big Fig is my favorite), I actually like the Yoda that comes with this. He's just odd. But cool. And looks more like Yoda then most of the Hasbro offerings. In an odd sort of way.