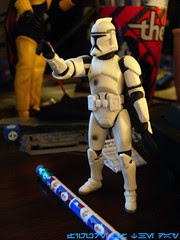 Bio: Virtually indistinguishable from one another, clone troopers are identical in physical appearance, mental capability and stamina. Part of a clone army, they are grown in the cloning facilities of Tipoca City, a luminescent city of industry emerging from the raging seas of Kamino.   (Taken from the figure's packaging.)

Commentary:  You might not be interested in reading about this Clone Trooper but rest assured, I'm not interested in writing about it, either.  Based on the once-legendary perfect rock by which all future figures would be measured, this Entertainment Earth exclusive white trooper has some black spots on it to simulate battle damage.  It's not what I had in mind when I pitched "battle damage" but you can't win 'em all.  (Hasbro would go on to do excellent damage on several clones later in 2005.)  He has a gun, is articulated nicely, and basically looks good.  These sets are pretty cheap and the figures sit adequately, so your main reason for picking him up-- aside completeism-- is to use them as filler for your vehicles.  You're going to need a few dozen clones for your AT-TE, and this is as good of a style as any.  To date, these exclusive damaged clones have never been sold outside the exclusive multi-packs, but (of course) the white and ranking troopers have been released a few times by now.

Collector's Notes: You should be able to get this set for about $30 on eBay, which I would argue is about right.  I appreciate that an army-builder set took the then-best mold and mixed up the deco a bit, and I'd love to see some of that thought applied to Stormtroopers or other troops today.  We've been getting too many plain white ones, and the same white ones at that, reissued time and again since what, 2008 or so?   Just throw some mud on the figure and it's "new," Hasbro.  We'll buy it.  We're not that smart.