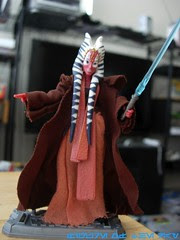 Bio:   Jedi Master Shaak Ti trains clone troopers on Kamino. The Jedi General observes the squads during training exercises, assessing their individual skills and ability to work as a team. With her colorfully patterned lekku, she is a striking figure who moves with agility and precision when demonstratng battle techniques.   (Taken from the figure's packaging.)

Commentary:  I'm somewhat surprised by the figures Hasbro selects for The Clone Wars line, as a Jedi with relatively little action like Shaak Ti gets made, yet the line is lacking in villains.  This isn't meant as a complaint, I'm actually pretty stoked to see Hasbro keep some of the movie Jedi characters in circulation.  Of course, it would be nice to see more of the original TV characters made into toys, but hey, whatevs.  Shaak Ti turned out quite well and is one of few Jedi to be made without armor on her hands and wrists.   Along with the likes of Luminara Unduli and Barriss Offee, she's a simplified version of the movie design.   As animated Jedi go, she's actually quite remarkable in that she has a cloth "skirt" in addition to her outer robes, which actually seem to fit her quite well.  Her hands are almost dainty, and her face is even more striking than the movie version.

While not super-articulated, Hasbro did a good job capturing the necessary articulation for a Jedi with pretty much everything you could want except for ankles, and now that we're in 2012 it seems ankles are a luxury reserved for The Vintage Collection as the latest animated Rex didn't even have knees!  So in a way, Shaak Ti is an example of how they made figures in the good old days of about 20 months ago.  Her lightsaber feels more sturdy and has a non-removable blue blade, and I dig that her right hand is in something of a "Force" gesture.   This is one of those figures which should satisfy collector needs and-- if I may be so bold-- it should be just fine for kids, too.  She can stand, she has a great range of movement, and she can hold her weapon... there's not much else you can ask for out of the Jedi tasked to train the clones on Kamino!

Collector's Notes: While not super-common, she could be had in 2010 if you kept your eyes open.   Today, she should be easily had for $6-$15.  If you stumble on her for $10 or less, I'd say she's a worthy addition to any animated collection.