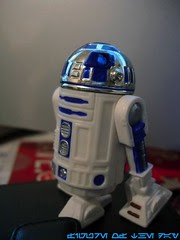 Bio: R2-D2 is a tripodal computer repair and information retrieval robot, or astromech droid. As an R2 unit, he is equipped with navigational starfighter interfaces, plus extensive sensor packages and numerous devices to facilitate in-flight repairs: laser arc welder, circular saw, grasper arm, and fire extinguisher. He communicates through information-dense chips, beeps and whistles and seems to take pleasure in causing anxiety for his neurotic companion, the protocol droid C-3PO.    R2-D2 played several important roles in the rebellion's victory over the Empire at the Battle of Yavin.  (It goes on like this.)

Commentary:  Happy 35th birthday, Star Wars!  Let's celebrate with a look at the very first modern R2-D2, which set off a lot of confusion in the ranks of fans, being one of the first modern figures to upset our perceptions of the films as shaped by Kenner's toys in the 1980s.   You see, R2-D2 in 1978 was much shorter-- this larger toy is closer to the size in the movies, which was spoken of as some unspeakable sin back in 1995.  How dare they change it!  Well, in many respects, it's a lot better-- remember, the original R2-D2 toy had a sticker for body deco, a bizarre dome which doesn't look at all like the movie, and only two legs.  Kenner incorporated the first-ever retractable R2-D2 central leg in the 3 3/4-inch line with this figure, plus the first-ever "light up" eye.   While a nifty feature at the time, fans were quick to point out that this part of R2-D2 doesn't light up in the movies-- a bit of his face directly under it does, though, but Hasbro rarely designs it to light up.   This R2-D2 also kicked off the modern tradition of R2-D2 figures continuing the trend of the vac-metal silver dome, which Kenner kept around for most release between 1978 to about 2008.

While not quite as accurate as today's best R2-D2 figures, this figure was a huge leap forward in 1995.  I mean, it'd have to be-- the body was sculpted, the stickers were gone, and the head sculpt actually looked a fair amount like R2-D2.  Of course by today's standards, I'm sure you could show this figure to new fans and claim it was a Turkish bootleg and they'd believe you.  But back then, when we hadn't seen a new Star Wars action figure in nearly ten years, this was a delightful, refreshing take on one of our  best friends from childhood.  It is no longer an essential purchase since Hasbro cranked out nearly two dozen versions of the droid and counting.  I still like it, though.

Collector's Notes: The 1995 versions of the Kenner Star Wars action figures are currently about as popular as the clap.  You can get them for pretty much nothing, and you probably don't want them.   Many figures from 1995-1997 are really worth a couple of dollars, and paying $5 may be too high.  R2-D2 has the distinction of being one of the first "pegwarmers" in the line, particularly at Kay-Bee Toy Stores which actually imposed limits of 1 or 2 figures purchased per day per store.  (Which reeks of communism.)  This resulted in R2-D2 being left behind in large numbers, no doubt due to his smaller size and Kay-Bee's $6.99 (which was actually the SRP) price tag.   R2-D2 began sitting at retail more often in 1996, and was usually joined by Chewbacca, Han Solo, and Darth Vader as the token "overproduced" figures.   "Overproduced," of course, being collector slang for "any figure I see, have, and therefore don't want."