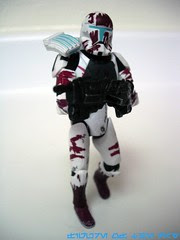 Commentary:  So Hasbro's back for round 2 of Sev, which is a good idea because the first boxed set of the Republic Commando figures was scraping $100 before a new-for-2011 edition came out.  It's better in some respects, and in others... not.  This one has better articulation, excellent paint, and by most fan standards, is an unquestionable improvement over the original.  The paint job is more modern, the red is darker, but it seems that the extra paint job and articulation has taken its toll, as an added clip-on piece for his right shin has been removed for this edition.  You might want to make sure you have both versions just to cobble together an "ultimate" version of your own.

By and large the set doesn't disappoint, but it's worth noting that this one cost about the same as the 2006 set, which had reduced articulation and two more figures than the 2011 release.  Hasbro did a great job getting fans the improve shoulder joints, knee joints, and ankle joints they desired and without even having to wait for a sequel.   This sort of thing proves there really is a market for Expanded Universe product still, and-- let's face it-- a lot of the product decisions we see about what does and doesn't get made really boils down to what Hasbro's current team feels like doing (and/or what the beancounters and management dictate.)  People still want to buy stuff, even if it's similar to stuff they bought five years ago!

Collector's Notes: The set was quite popular at Toys R Us stores in 2011, disappearing rather quickly from some stores.  The set currently sells for $40-$60, so if you stumble on one at or below retail price you ought to get it before the price shoots up.  Some Expanded Universe figures have a habit of getting expensive as video gamers have more money to spend on toys than toy people, it would seem, by virtue of there being fewer video game toys to buy.