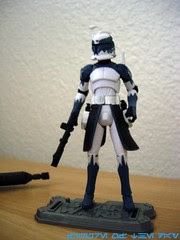 Bio:    Clone Commander Wolffe is under the command of Jedi General Plo Koon. Wolffe is a seasoned trooper who uses his extensive battlefield experience to lead clone troopers through the challenges of combat. His scarred face and lost eye are the result of an encounter with the skilled assassin Asajj Ventress.   (Taken form the figure's packaging.)

Commentary:  A mix of new and old parts!  Commander Wolffe is made of bits and pieces from Commander Cody and Captain Rex with an all-new head and the second version of the Rex helmet mold-- it got redesigned for later releases of this kind of figure.  It's pretty great, too!  As the head of Plo Koon's divisions, more or less, he has grey accented armor which looks pretty good.  I'm not going to lie to you, it's not super-exciting but the jagged edges do look striking compared to the simpler designs of other figures, plus the wolf (get it?) on the shoulder is cool.   The main point of interest here is the head sculpt, which has a damaged right eye which looks far more disturbing and messed-up on the figure than it does on the show.  His scowl is serious, as is his hair.  That's not a crop of fuzz that's going to crack jokes.

While you no doubt are not in the market for more clones, I like this one a lot.  Wolffe doesn't get the same level of attention as the other major commanders, and he's more visually distinctive.  I'd suggest getting him.

Collector's Notes: A new Wolffe is probably out at a store near you by now, but this first release is nice too.  You should have no problems getting him at or under ten bucks.    He shipped in more than one case which helps keep his price down, and the new Phase II version will probably draw interest away from the 2011 release.

Nothing to do with the figure, but I nearly pissed myself laughing at your ad for SW FOTD on 16bit. Good work!

The articulation is really good on this figure. I love the ball jointed wrists.