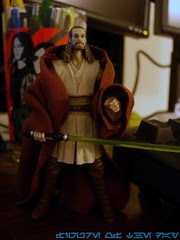 Bio:  Qui-Gon Jinn was a revered, yet maverick and unconventional Human male Jedi Master. He was the Padawan to Count Dooku, and the mentor to Obi-Wan Kenobi and briefly Anakin Skywalker.  (Stolen from Wookieepedia.)

Commentary:  In 2008 this Qui-Gon Jinn was the definitive version of the character, and today... well, it still is. The mold has been trotted out a few times since then, proving that Hasbro can probably make more money by making a figure right the first time and just re-cranking it out in new packaging, in new gift sets, or with new accessories.  No doubt, the figure could be improved with a little more care in the paint.  The moustache and beard are thick, blending in to one another, where it seems they don't quite merge in the same way in the movies.  So really, Hasbro could get yet another use out of this figure just by painting the head better next time, although I'm a little sick of the mold after so many reissues.  It's still fairly good, though, except it still includes a 1999-style lightsaber without the flared blade.   At this point it's kind of inexcusable, but I digress.

The tall Jedi includes a removable cloth cloak which, as usual, is big to the point of being annoying.  But once you take it off, the sculpt is quite good.  Hasbro put in some great detail in the boots and outfit, with the textures turning out quite well.  He has some cloth elements and like most Jedi has difficulty sitting, but a 2012 Battle Pack version aimed to fix that by returning to squared-off t-crotch joints.  (At press time I don't have it and I'm quite eager to see how it turns out.)  For now, this Qui-Gon is the one all collectors should chase down, although I might suggest fun-loving collectors get the Movie Heroes rerelease-- I'll review him with his gun in the future, but the vintage version or any of the other releases are, for now, basically just as good as the original Evolutions set.

Collector's Notes: This figure has been reissued a few times.  In 2009, it was part of a mail-in offer with an Eopie, but that release lacked with robes.  In 2012, it was put out on a Vintage cardback as well as a Movie Heroes and Discover the Force package.  The Movie Heroes one is notable for introducing a new firing gun, which is an odd accessory for a Jedi master.  The Jedi Legacy Evolutions set is the version you really ought to buy since it includes a novel version of Luke Skywalker and the only movie Bultar Swan to date.  The set can be had for as little as $15 before shipping, and it's totally worth it as all three figures are excellent.