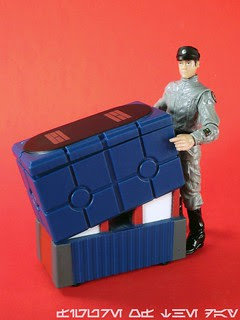 Bio: The Millennium Falcon is captured by the Death Star.  A scanning crew searches the ship while Stormtrooper TK-421 stands guard outside the ship.   (Taken from the figure's cardback.)

Commentary: There are few figures which fans can claim they've been waiting on for years, but Hasbro first promised this Imperial Technician back around 2009 - the idea was that they would release the same figure with two heads and different pieces of scanning equipment, so by buying both, you'd get a whole crew.   At least it made it out, but this figure may hold the record of the longest wait from an explicit announcement to an actual plastic release.  I could be wrong here.

The figure itself is basically the same as the one in the other set, save for a new head.  It's also similar to the 2009 Legacy Collection figure, meaning you'll probably enjoy the 14 points of articulation, working holster, blaster rifle, and all of that.  What you won't like is that the head is clearly too small for the body, but that sort of thing happens once in a while and at least it's for a trooper in a diorama where the head is not quite as important, anyway.  Still... Hasbro could have done better here.  The expression is bland as usual, with sideburns that clearly set him apart from his scanning siblings.   A new head is, for me, always good enough to warrant another purchase so I'd say go ahead and enjoy this one.

The reason to buy this set - and I would assume the reason it was delayed - are the scanning tools.  There are a lot of paint applications here, plus numerous pieces which can be removed.  I wouldn't be surprised if the real reason this got delayed so long was because Hasbro couldn't cost it out as a basic figure in the 2009 manufacturing world, it probably just resulted in the figure breaking its budget and as you all know, we can't have that.  The case has a removable lid, and some assembly is required to fit the bottom platform into place.  It'll snap when it locks in.  Inside, you'll find a canister with a hose that plugs in to a larger beige box, plus a removable silver scanning device of some sort.  To me, this is where the value comes in - the figure set is inarguably more worthwhile than 2 or maybe even 3 Black Series figures of this size, so you won't feel bad about shelling out for it.  There's a lot of paint, and it's all quite clean and clear.  The extra pieces snap into place in the scanning equipment, and it fits over the original 2009 piece quite nicely.  It does not snap into place, though, so don't be surprised if it falls out when you lift it.   As an added bonus, you get a stormtrooper blaster.

Thankfully I didn't have to, but I would've paid just $16 for the scanning crew and his equipment.  It's certainly good enough to warrant it, and the Stormtrooper is a wonderful bonus - which is probably also worth $10ish.  You get your money's worth here, so go get it.  The other set is not quite as amazing and we'll look at that next.

Collector's Notes: Hasbro didn't go out of their way to tell you how awesome this set was - which is for the best, given Kmarts are closing left and right.   Both figures are worthwhile and in my one sighting to date, this set was in the shortest supply - no surprise there, as it's easily the more desirable of the two.  If last year's Ewoks and AT-ST is any indication, there were probably a large amount of these made and they will continue to trickle out through the season.  Don't overpay just yet, unless you don't live near a Kmart.  In which case, go ahead and overpay.   $20-$25 feels totally fair, $30 feels like what we'll be paying anyway in four years.  Go ahead and get this set, you'll be glad you did.  Oh, and it's worth noting that the packaging is mostly air - Hasbro could have made this half the size, easily.

I absolutely love the care that was placed on this set! This crewman (despite the small head) is a welcome addition to my collection for sure. The box with all the fun goodies in it exceeds all of my expectations. As far as I'm concerned, this piece was meant for a special figure set and should've never been designed for the basic figure line.