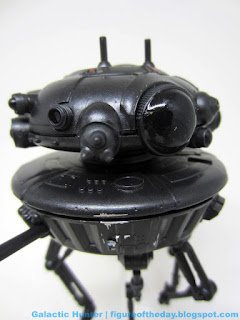 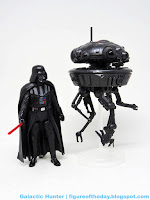 Commentary:  Since I was a kid, I've loved the Probot, or Imperial Probe Droid in the modern vernacular.   We've had precious few toys from Kenner or Hasbro of this one, like the original in the Turret and Probot Playset, the tiny one in the MicroCollection Hoth Wampa Cave, one in the MicroMachines/Action Fleet ranges, and of course Kenner's deluxe 1996 model which got a decent redeco around 2008.  This new one?  It's better.  It's what you want.  If you're happy with what you have stop reading this, because you might end up blowing $20 on this over the weekend.  Provided you can find it - it's one per case against three of the superbly weird Rathar.

This is the probe I've been wanting.   It comes completely assembled, all you have to do is turn around the legs into a pleasing position and pop him on the display stand.   He has a launching rocket and Force Link sound capabilities.  (Basically, you wear a bracelet that remotely sends power to the toy rather than putting batteries in the toy itself.)  You'll recognize various sounds from the movie as you hold it, and if you shake it you'll get other noises. 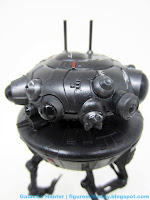 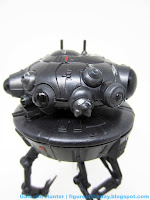 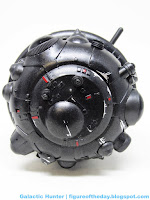 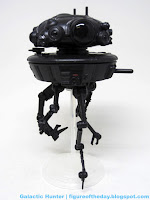 The droid has a big articulated head with fake silver wear and tear, red markings, glossy black "eyes", and this perfect dark grey metallic skin.  It's great. It's the best.  I was stunned to find that the antenna on top of its head telescope up and down like in the opening moments of The Empire Strikes Back.  I was also stunned to see that the rocket doesn't fire worth a crap.   You can't win them all.   The undercarriage arms have many joints, but not every "joint" moves - be careful to not damage anything.  Some of the little claws move, and some do not.  At $20 I would prefer they all move, but it's not about what I want, is it?  Is it Hasbro?  (Well, you did a fine job all the same.) 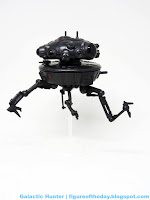 The clear display base has an Empire logo motif while standing up super sturdy.  My little droid friend sits on it without feeling the slightest bit unstable, which is not normal for most figures I buy.  Hasbro did a good job here and other than maybe the price, I can't complain.  (Given Darth Vader alone would probably sell for $7-$8, an extra $12 for the Probot ain't too shabby.)   This robot is better than you might expect in a 5-jointed figure line, so go run out and get it with my blessing.   With a Wampa coming too, it's shaping up to be a good season for The Empire Strikes Back fans... and frankly, I'd rather they spend more time on "legacy" movies for Force Friday and save the new stuff for movie time.   Give me a reason to be excited to buy some toys, I've got plenty of ciphers as it is.

Email ThisBlogThis!Share to TwitterShare to FacebookShare to Pinterest
Labels: Empire, The Empire Strikes Back, The Last Jedi, TLJ Line Look