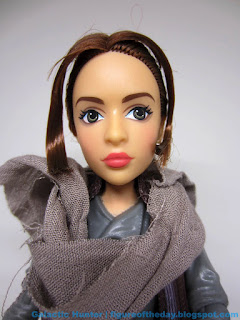 Bio: A rebel to the core, Jyn Erso takes matters into her own hands to protect others!  (Can from the figure's packaging.) 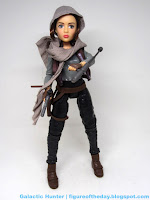 Commentary:  When I first saw Forces of Destiny stuff, my reaction was "Oh, neat. This isn't for me."   I still feel the same way - I bet there's a lot of success here because Hasbro usually dropped the ball with women in all of its action figure lines (ditto Kenner, Toy Biz, Mattel, etc.) during my lifetime.   The female-focus is a great start, but where do you go from there?  Men, of course.   Oh well.  Jyn Erso was part of the line's debut, which I wish took place a year ago rather than after that movie's time in the sun ended.   This adventure doll was designed to do what dolls don't - stand.  This figure stands better than many 3 3/4-inch and 6-inch action figures I own, which is remarkable when you consider this is a feat even Barbie can't accomplish. 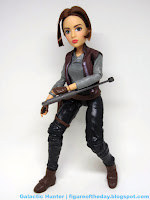 Her hair in the front is stiff, and there was a weird fastener going through her hair into her head in the packaging.  I couldn't remove it, so all I could do was push it under the hairline.  (I didn't like it.  It disturbed me.)   Her hair looks a little weird out of the box, but maybe I could glue it down or something.  The face is a decent likeness of Felicity Jones in doll form, and the costume has cloth elements like a vest and a scarf.  The boots are separate rubbery pieces which look potentially removable, but I'm not going to mess with it.  Her belt has a working holster and removable blaster, plus she has a cool baton to club people.

If you squeeze her legs she does this twist-and-bash action that's kind of fun, but it's a little soft.   It's better than many features on smaller toys for boys, though, so I give Hasbro credit for making something that kids may enjoy regardless of gender.  (But time shall tell if there will be a "doll" stigma.) 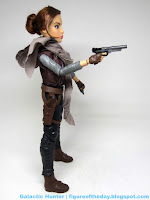 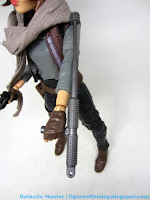 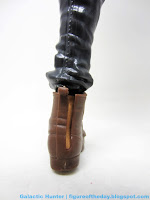 While the figure is well-engineered with a pleasant design and surprisingly good articulation for the price - the same as a 6-inch The Black Series figure - I don't think I'm going to go all-in on the 11-inch adventure figure format.   I might pick and choose, but as a too-old collector who came up during the original trilogy I'm just not really feeling any new scale of figures.   I just want to stick with 3 3/4-inch and possibly 6-inch until it becomes a burden.     It's a decent product and I'd advise you buy one for yourself just to try it out, or better yet, buy one for a child in your life and play with theirs.   I'd love to see this line take off and grow, but due to size, space constraints, and the fact I already have many other Jyn Erso figures I wouldn't call it essential.  It is good, but all I want is something else.   If this line launched with something I didn't already own as a toy in multiple sizes, I think I'd be more excited for the form factor.