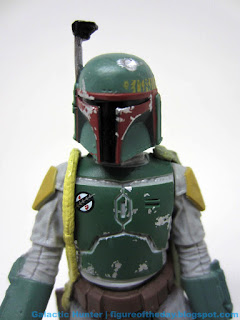 Bio: Boba Fett was a male human bounty hunter, and the genetic clone of infamous bounty hunter Jango Fett. (Stolen from Wookieepedia.  Packaging has no bio.) 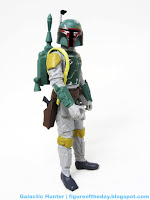 Commentary:  There is a short list of characters I think Hasbro needs to keep in constant (like every 1-2 years) circulation, and near the top of that list is Boba Fett - last sold in the main line in 2015, as part of the rotten Armor Up figure assortment which has mercifully been smothered.   This particular Boba Fett is really skinny, based on his appearance in The Empire Strikes Back.   It also adds something we haven't seen in nearly two decades - an extra large "off-camera"  backpack, although in this case it feels like it really works well. 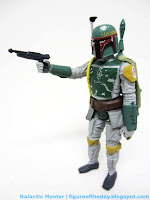 The sculpting appears new, with a lot of small details and nice wrinkles.  The belt has some added detail thanks to some holes in it, while there's a strap connecting the armor covering his crotchial region.     Most of what needs to be painted is - battle damage, knives in his pockets, some  bolts, and so on.  The rangefinder doesn't move, but the proportions all look good and right.  The only place he falls short is his movie backpack - like his blasters, they're completely unpainted.  There are more ornate Boba Fett figures, or ones with more articulation, but this one is pretty good - the swivels swivel where you want them, and you don't get the weird "this doesn't quite bend" in his elbows.  It's a mixed blessing. 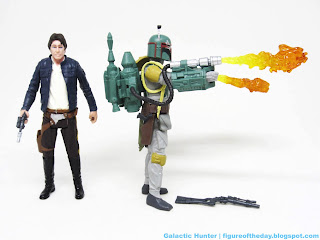 His big goofy fire backpack is a hoot.  The hands grip on to giant Mandalorian gauntlets with massive plug-in flame bits.  The backpack plugs in to his back, and there's a hole so he can plug in his movie backpack, too.  What's more you can even plug the movie backpack into the giant weapon backpack - a nice touch, and a functionally sound idea.  Boba Fett can remain standing with the gauntlets fully extended forward, thanks to the counterweight keeping him upright and his center of balance where it should be.  Hasbro did an excellent job engineering this figure.  My only real challenge here was getting his hands around the flaming grips - I had to use a small tool to wrap his hands over the handles.  Other than that, everything worked easily. 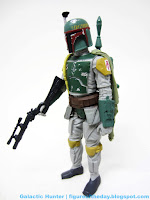 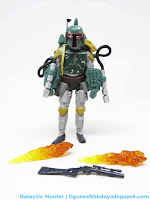 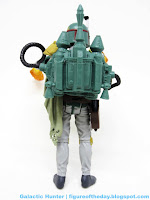 The Force Link sounds are interesting - "Orders are to finish you off!" and "Don't bother hiding" are new, with "He's no good to me dead" being supplied in the 2004 DVD voice.  The "Orders" quote actually does sound like Tem Morrison, but I doubt it's actually him.   The rocket pack has a separate sound clip with other action sounds.  Boba himself also has a rocket pack sound if you wave him around wildly.

Even if you don't like it, it's good.   My big gripes about most figures is poor functionality - that is, a bad joint or accessory bothers me more than no joint at all.  Seeing how much Hasbro put in to this particular edition of Boba Fett, the first all-new 3 3/4-inch one in several years, makes me superbly happy.   This may not be an essential buy for anybody, but if you want a Boba Fett at a decent price you could do a lot worse.  It's fun, so if you like fun give it a look.  And after this one, we're going back to a more normal schedule.

Packaging Notes: The box is pretty good - not too big, not too small.  There is no mention from which movie this product hails.