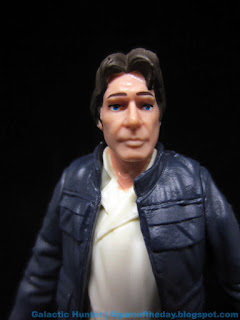 Bio: Han Solo was a human male smuggler who became a leader in the Alliance to Restore the Republic and an instrumental figure in the defeat of the Galactic Empire during the Galactic Civil War. (Stolen from Wookieepedia.  Packaging has no bio.) 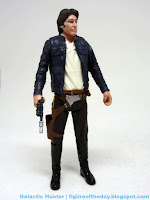 Commentary:  First shown at Toy Fair, we got an unusually early sneak preview of Han Solo as Disney and Lucasfilm are being weird about keeping a lot of this stuff under wraps - despite Walmart having no problems putting it out on shelves weeks ahead of time.   "Do we need another Bespin Han so soon?" I thought - and I still kind of feel that way.  We got one just a few years ago in the Saga Legends line, and this one is pretty similar - he looks a little older and lumpier if you get too close, but it's another Bespin Han and seeing him released at a time during a movie where he's chronologically dead in the story, well, yeah.   We know Leia is in the movie, and we still didn't get a Leia in her Resistance outfit yet, nor did we get any Leia in any main 3 3/4-inch non-exclusive figure line from the two sequel movies just yet. 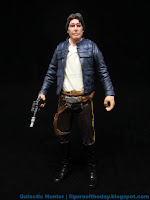 This is a pretty good figure.  It's not going to be your favorite Bespin Han, but it comes packaged with Boba Fett and it gets the job done.  His blaster fits in his holster, and he sits well.  The yellow striping on the pant legs are textured, and the jacket has a slight blue hue to it.     The shirt is good, the pants are crisp, and the boots are glossy.  There's not much of a neck here, but the design is otherwise pretty decent.  But it's not amazing - you've seen the picture, the face is Harrison Ford-ish but it's not going to change your life.   His likeness has  been tough to capture since day one, and they're still working on getting it perfect.  They did a spectacular job painting his belt, though - the rivets are great, and I believe this is the first Han Solo action figure made in Vietnam. 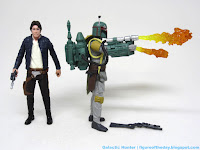 If you get this figure set, you're getting it for Boba Fett.  Han is a nice addition, and he has some dialogue from the original trilogy if you futz with the Force Link accessory.  I don't think I like how many of the figures introduce themselves - as an in-store demo it would be cool, but as a toy it's kind of annoying.   Get it if you're jonesing for some Ford action, otherwise go grab something that's completely new instead.