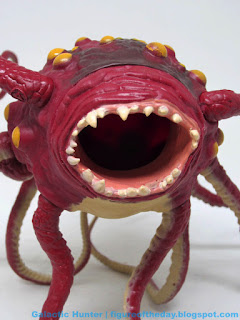 Commentary:  When The Force Awakens hit, one of the biggest disappointments was the discovery that the toy line was over.   Hasbro had virtually no post-movie plans - everything they developed was before the final cut of the film, and that depressed me.  Thankfully they went back to the well and gave us a Rathtar with a pack-in figure we actually wanted.   When it comes to creature figures, it can  be tough to strike the right balance between features and appearance.  The Bantha just had to be furry and seat a Tusken Raider.   The Dewback needed to move a little bit.   A good Rancor Monster should be able to look like he can gobble down a figure.  So what about a Rathtar? 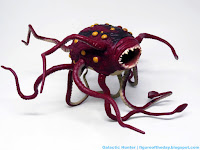 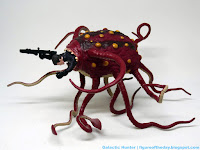 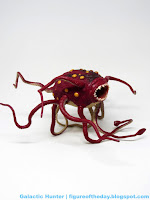 After assembling over a dozen tentacles, I'd advise caution.  It looks cool, but those things need to be shoved in tightly and even then, they're easy to knock loose.  It's not a good form fit, but it's a pretty piece.  The hollow mouth can actually fit an action figure, but not all the way.  (This is a good idea.)   The ghoulish Lovecraftian horror is mostly mouth and guts plus tentacles, a good representation of the movie creature.  The only action figure to speak of is a Force Link sound effect, which includes a number of slurping, wet sounds that would be in line with any tentacle monster or Cthuloid being from another dimension.  There are roars and what also sounds like a rolling sound.

The design is bumpy, warty, and uninviting - just like a good monster should be.   It's smaller than I expected, but seeing as they could roll and jump through small ship corridors I suppose that means they got it exactly right.  It may not be quite as ornate as a Boga or as chomp-tastic as the Opee Sea Killer, but it looks cool and is fun to play with.  Provided you don't lop off his tentacles before a door does!   For $20 it's a worthwhile purchase at today's figure rates.  If Bala-Tik is worth $8 (and he is), $12 for his monster buddy is a bargain.