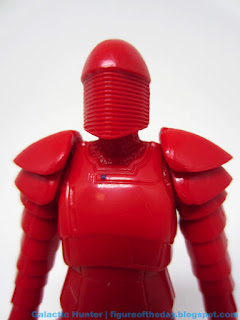 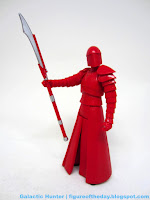 Commentary:  Some things make good sense and some things... less sense.   The Elite Praetorian Guard is something of an unknown, other than there are multiple flavors and apparently the non-elite one, for now, is exclusive to a $200 playset.  Well, so much for troop building.  Both the Elite and non-Elite versions are similar other than the helmet and weapon, taking cues from the classic guards of the Lucas era with the flatter, feature-reduced look of the Disney-era helmets.   The Snowtrooper and Flametrooper of the First Order barely have eyes, and they're much more subdued.  So too is this guard... which has no real face to speak of.

A ribbed face mask covers its mug, with a domed helmet on top and some armor on the back.  There are no eyes, no mouth, no nose.   It's a distant design, possibly attempting to make the military of the First Order increasingly literally faceless while taking cues from some of those weird mask/glasses things we occasionally see on tabloid news shows.   Its built-in blandness may work for thematic purposes, but it's a drag.   It's almost too normal - the Senate Guards were long and ornate, as were the Emperor's Royal Guards.   The design feels much more based in reality, this seems like something someone in a made-up country on Earth in a movie might have in its color guard. 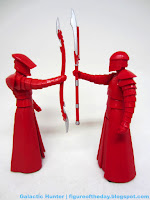 The figure's body is a little more interesting, with nested shells for arms and a dress.   The gown is nicely textured, standing easily and posing nicely.  The figure is a perfect execution of the design in the format, with swivel shoulders, moving hips, and the ability to hold his one-piece pike weapon without a problem.  Being able to double-hand it might be cool, but at this time we have no idea what it will be doing in the movie.  Perhaps it will be a combat character, or perhaps it will be a statue.

It's not bad... it's a good figural execution with lots of textures, bright colors, and great abilities.  The design from the movie sucks, though.   So kudos to Hasbro for delivering the goods as best as you could, and boo to the art team who came up with this one.   For those looking to fill out a scene, that may prove challenging.  Hopefully time will lead to an abundance of these if you want them, but it makes me love the First Order Stormtrooper design more than a little bit more.