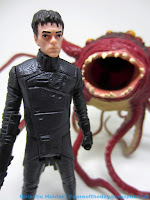 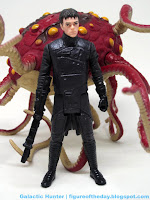 Commentary:  When The Force Awakens hit, I was delighted by so many characters and robots and monsters being thrown at us.  As such, I was disappointed by the lack of toys of said ruffians.  I can only assume fans felt the same way in the 1970s when we left the original film with only 20 figures, none of which were a Bantha or Cantina Band or Grand Moff Tarkin or Garindan.  Those would take 20 years.   Bala-Tik, the Scottish-sounding Guavian Death Gang negotiator, only took two years. 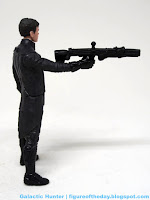 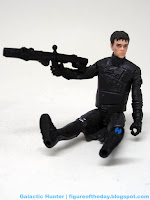 The armored figure was made in Vietnam, which I thought to check after removing him from his package because he was designed well.  Figures from China typically have more elements of the coat hanging off the figure, hindering their ability to sit.  Vietnam's factories have been more severe, cutting it off in the back so the figure can easily sit in a vehicle, or on your desk.  I first noticed this on some of the Rogue One figures, as the Vietnamese products were generally better looking and better articulated than their Chinese counterparts.

Force Link sound effects include "You're a dead man," "Take the droid," "Find cover," and "The Rathtar has escaped."   It also makes blaster sounds and screams. 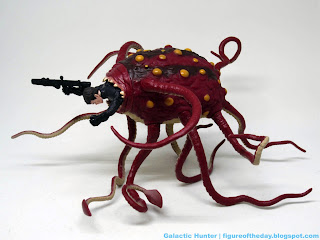 The likeness is pretty good, but not great.   Humans are tough to do well, and while I think the armor is perfect there's something about the eyes that's a smidgen off.  It's good enough, of course, and I'm glad we already had one of his gang to hang out with him.  (More would be nice.)   The figure has no problems standing or holding his rifle, so it ticks all the boxes of "good enough."  By itself I'd gladly pay $8 for it, because it looks nice and it's a new character in the toy format.   After being a collector for so long, new characters are the thing that get me the most excited.   The Rathtar is a nice bonus, so go ahead and grab this set if you see it and enjoy The Force Awakens stuff.   Hasbro is setting a good precedent with the release of more new toys from that movie, and I hope it keeps going long enough to get to the countless other great designs.