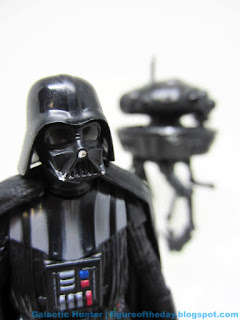 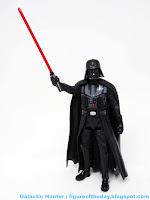 Commentary:  "How many Darth Vader figures do you need?" you might say, if you're my dad.   By my guesstimates we're in the 40-50 range, which is quite a lot of 3 3/4-inch figures of one guy who doesn't really look all that different from movie to movie.  This new take is posed a lot like the Rogue One release from last year, but it's clearly a new sculpt with new gloves and a new chest.  The pose, waist joint, and unique cut on the inner skirt cape - plus some wrinkles - look like last year's release too.

Darth Vader can't stand.  His capes make him too back-heavy, even leaning forward my sample falls backward.  Without a display stand for the Sith Lord, this is somewhat troubling in 2017.  Heck, in 1995 it was insulting.   There's no reason this shouldn't stand now, yet here we are. 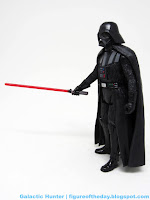 The figure is marvelously sculpted with a textured cape that really cooks.  They did a nice job here, if you look at it up close you'll see one of the better fabric textures on any plastic action figure.  Vader's armor is as it usually looks, but rather than make the stripes on his chest silver or gunmetal grey it's a weird flat grey.  I don't like it.   You might not notice, but it's weird and I believe unique to this release of the character.     The buttons on his chest are a similar color, which would make me think the door is open for a running change.  I'll be watching.   Vader's saber is a flare-free model, and it fits in his hand nicely. 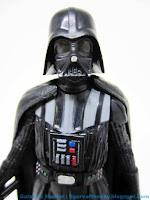 This figure can't stand without support, so naturally I take issue with it.  The engineering is otherwise good, with a good sculpt, and only that one paint flaw.  I appreciate the waist joint, but I'd appreciate it even more if it was just a smidgen better.  It's still a worthwhile purchase because of the probe droid, which you will want.  The Force Link sound clips are pretty good - they're all from Empire and include "Sweep the asteroid field until they are found," "Prepare you troops for a surface attack," and "If you only knew the power of the Dark Side."  If you shake him around, you get lightsaber slash sounds, blaster shots, and "Don't underestimate the Force."