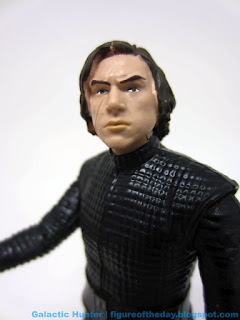 Bio: Kylo Ren, a human male, was a Force warrior and a former Jedi trainee under his uncle, Jedi Master Luke Skywalker, before Ren destroyed Skywalker's attempt to restore the Jedi Order and became an apprentice of Supreme Leader Snoke of the First Order.  (Stolen from Wookieepedia.  Packaging has no bio.) 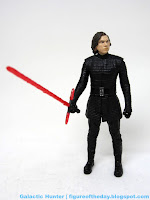 Commentary:  Hasbro launched its The Last Jedi offering with a whopping three figures of Kylo Ren, and this is the least essential.  A helmeted one comes with the Force Link gizmo, the single-carded one has better paint and a cape, and then there's this one - the pack-in to the TIE Silencer.  It looks very similar to the individually carded figure, but it's from a different mold - the feet have different copyright and Force Link markings on them.   It has five joints, an unpainted scar (as opposed to a painted one on the individually carded figure), and a lightsaber.  It's pretty good - I like the vehicle a lot too.  Oh, and the sound chips are different.

Hasbro did a decent job here with very, very subtle paint on his lips and no scar paint.  At this scale the lack of paint works well, as the sculpting and shadows from the light do the heavy lifting.  Kylo Ren's eyes aren't as fancy as the other versions, and the hair isn't painted as well either.   In other words, this is a great figure to throw in a vehicle as a pilot.   There's little variation in deco, but you'll note glossy fingers, a shiny belt, and even glossier boots bringing it to life.  He has no problems standing, sitting, or fitting in a vehicle, and what's funny is I realize just how much I take it for granted that things work.  Snoke fits perfectly in his throne.  The A-Wing's pilot just plain works.   Everything here succeeds in ways we previously had problems, and back in the 1980s this was merely normal.  Kudos to Hasbro for making sure this functions correctly - even if there's no lightsaber storage bay.   (Hey, I gotta complain about something.) 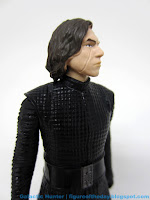 Kylo Ren is very similar to his previous incarnation with the black and the fancy belt buckle - but he has shorter robes.  Actually, it's like a short skirt rather than the dress of the original.  This makes it much easier to get him in a vehicle or something, which is a lot more important these days.   This is a much more stripped-down and dynamic Kylo Ren, which is interesting to see as Hasbro seemingly focused on revealing his face while the first movie's pre-launch window focused on almost completely concealing his identity.  Minus that Annie Leibovitz picture we all saw and a lot of people assumed was just some silly thing, but apparently it was not.   But you know that.

Long-time readers know I really love vehicles, and aliens, and robots, so this figure is related to part of that.   You're probably better off getting another Kylo Ren for the sake of character representation, but this figure does what it needs to do and delivers the experience of being good enough.   Get it if you want the vehicle - just look at the hair paint when you do.