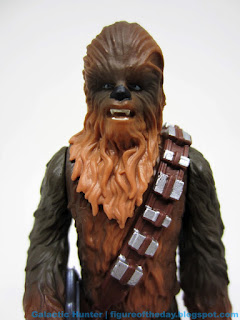 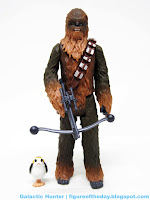 Commentary:  Another movie, another Chewbacca.  We don't get one for every launch day, but we have had quite a few over the last decades.   This one is really tall and better articulated than most, being able to stand and sit with good hip joints complete with a good clearance  His mouth is open and roaring, his hair painted well with a decent fade.   I love that his skin shows and is painted, and that his eyes seem to be blue.  Chewie's bandolier is a separate piece, and it looks great.

I ran back to my The Force Awakens Millennium Falcon to see if he can sit in it, in particular since no The Last Jedi version seems planned.  Chewie is a tight, awkward fit in the cockpit but fits fine in the med bed, the put around the Dejarik table, and in the gunner station.   This may well be one of my favorite modern Hasbro Chewies because he can sit flat on the floor, which figure figures save for the 1978 original do well.  The fur sculpting is good, and it's consistent with some of the finer efforts out of the company as of late. 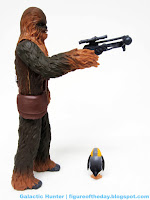 Chewbacca's Bowcaster may be the worst ever, unless it breaks in the movie, in which case it's the best ever.  The front part and the scope are separate pieces, not glued on and barely held in with friction.  If it drops, the weapon flies out of his hand and the pieces scatter on your desk.  It's also smaller than other bowcasters.   Long-time readers know I hate customizing or altering a figure in any way, but I'm actually going to advise you to glue this one.  If you knock him over, you may never see the complete bowcaster again.  It comes unpainted and is otherwise interesting. 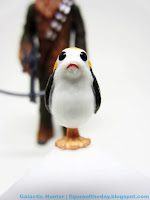 His Force Link sounds include what sounds like 4 distinctive roars.  When you shove him forward, you get blaster bolts and, eventually, an explosion sound.

He's joined by a Porg, which is probably why you'll buy the figure.  At not even an inch tall, the figure has no Force Link markings and just stands there.  It's cute, it's under 1-inch tall, and the deco is pretty good - it looks sort of like an otter, a seal, a pug, and a puffin.   I anticipate much in-store pilfering to get this accessory.  As of now I am unaware of it being available with other figures, but as I write this Hasbro has kept the contents of the figure assortments partially obfuscated.  The deco is good, it has no articulation, and it's cute. 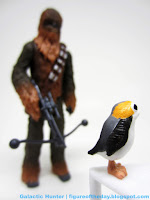 Overall, it's pretty good.  A Porg is more interesting than a wacky blaster or a big helmet, but the cost/value may not be there.  The Force Link gimmick is cool, but not visually apparent.  This may mean new buyers are going to wait for sales - at $6 or even $7, this is a pretty great set.  More than that, you may be left uninterested in sealing the deal with another version of the best Wookiee first mate in the galaxy.  This is a fun figure, though, and a much greater value than C-3PO.   (Threepio has no accessories.)

I saw this one in the stores but was so uninterested in another Chewbacca that I didn't even notice the porg in there! Ironically, I would have purchased it for the porg. I'll have to keep my eyes peeled in the future…