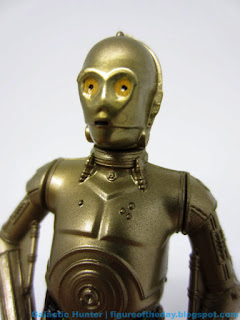 Bio: C-3PO, sometimes spelled See-Threepio and often referred to simply as Threepio, was a 3PO unit protocol droid designed to interact with organics, programmed primarily for etiquette and protocol. (Stolen from Wookieepedia.  Packaging has no bio.)

Commentary:  Thanks to his ubiquity, we rarely go more than one or two years without a new toy of C-3PO.   This one is arguably the least interesting in years, or the most like 1978's original in the modern era since 1995.   It's all gold, with no accessories and no silver leg or red arm.   He has 5 joints and at first glance looks a lot like the previous "Mission Series" 2-pack versions.  But he's new.  Just not that new.

Hasbro seems to have made a new figure from a similar digital sculpt, with changes in the torso wires, tweaks to the arm poses, and that flat gold that's so popular with the kids today.  He has no problems standing, and can sit about as well as most C-3PO action figures - it's not a 90-degree angle, but he can sit in some vehicles or seats.   His sculpting is clean and crisp, and the deco is perfectly fine - but I do worry that this dull gold may molt off with time.  It's rare, but it has happened with some other figures in the past. 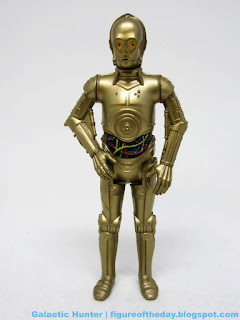 Force Link sounds include "Without the Republic Fleet, we're doomed!" "The odds of survival are 725 to one," "R2-D2, where are you?" "I am C-3PO, human-cyborg relations," and "Oh my!" if you shake him around.  It's hard to get sounds out of him consistently, so there may be more hidden in there - or Easter Eggs.

If you're happy with the C-3PO you have, you can keep it.  This new one is arguably an improvement thanks to the added Force Link chip, but the figure itself is somewhat expensive for being accessory-free.  I saw him hanging while other figures sold a few weeks prior to launch, so it wouldn't stun me if this winds up being a stinker of the new line unless kids are really interested in just owning any C-3PO.  This isn't impossible, because the last time you could get one was in 2015, and the last individually packaged C-3PO was in The Black Series 3 3/4-inch line.   I like it - yellow eyes, good deco, and a decent personality can make up for a lot.  You could do better, but you've also done worse.

Packaging Notes: The basic cardback is lighter and has less material than before, and is much easier to open than the last two films.   There is no bio on the packaging - a shame - and no co-sells.   There are photos of the figure on the box, though, which have been absent for a few years.   I know I say this a lot, but this may be the worst overall 3 3/4-inch packaging for a single basic figure yet - it's about 70% warning labels.and Force Link upsells with no other figures, vehicles, or toys being promoted.  The movie's title "The Last Jedi" is absent from the packaging.  The last time this happened was in 1999 with The Phantom Menace.  Coincidentally, that was also the last time the line launched with a C-3PO and no R2-D2 in the first wave for a new movie.