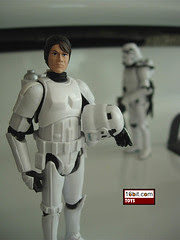 Bio: Specialized stormtroopers, dubbed “spacetroopers,” are deployed to Zero-G environments, such as areas outside the Death Star’s artificially generated atmosphere. They wear specially designed suits that have sealed armor and are equipped with rebreather packs. (Taken from the figure's cardback.)

Commentary: How many times can Hasbro reuse the 2004 Stormtrooper body? Many. The Spacetrooper is a fairly extensive retool of this mold, as it takes the same basic body and revises the helmet, tweaks the armor, adds a backpack, and also has an added bonus-- the head of behind-the-scenester Joe Johnston is under the helmet. Which is awesome, and fodder for custom "proto armor" Boba Fett figures. If you already have a basic Stormtrooper, and are the kind of person who buys more than one of any generic trooper, you absolutely need to have this. Glimpsed at for a brief moment in the original film, this figure could probably almost double as a SCUBA Trooper if it had swim fins. The giant rifle looks like some sort of chopped grenade launcher, and the design puts a great new spin on the old design we've bought many times by now.

You pretty much know what to expect with this guy if you bought any of the recent Stormtrooper figures. It moves nicely, has a fair amount of gear, and you can also use it as a basic Stormtrooper if you lose the backpack and hose. Fans of the Empire have nothing to complain about here aside from Hasbro not releasing it earlier.

Collector's Notes: Hasbro confirmed that this was a fan's demand that actually ended up doing obscenely well. This one is even going to be repackaged in the red cards, so you know it's doing well. It's also the only variation on the Stormtrooper left untouched by the vintage line that didn't involve someone in a disguise. So kudos to Hasbro for milking that cash cow one last time, particularly because it turned out so well.

I agree wholeheartedly, Adam. The best figure, even at mostly a re-use, from one of the best lines in a long time. I'm not a trooper-head and even I got two of these, they're just that good.

I agree with both of you. It's GREAT to see Joe Johnston's head under there. Like the Ralph McQuarrie figure. It's so cool to see REAL cameos and not just 'wished for' cameos, like Lucas as stormtrooper or X-wing pilot. (I know Joe's is just a behind the scenes photo cameo, but still.) Come to think of it, Joe was a Hoth soldier, too, in front of Ralph giving directions to two other ESB artists! Now we just need Richard Marquand as the doomed ATST driver from ROTJ. (I wouldn't turn down Robert Watts as the other ATST driver, either!)