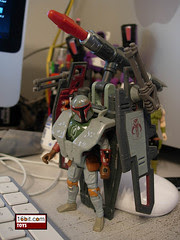 Bio: Hey kids, it's Boba Fett! (Not taken from the figure's packaging.)

Commentary: This deluxe Boba Fett seems like some sort of sick joke. For years, fans have wanted a rocket-firing Boba Fett because thousands of children were denied one in the 1970s, so this twisted wish fulfillment seems like more of Kenner being cute than anything else, but it was made out of the 1990s and that was a pretty good era for toys as toys. Kenner would often expand its own concepts and build figures to have large accessories with moving parts because-- shock!-- kids enjoyed playing with them. For a few more bucks, you could get what amounted to a retooled basic Boba Fett figure and a much larger jetpack. This one had flip-out wings, a big skull on the side, and yes, a firing rocket. But look at this thing, it's just hideous. I admire it as one of the final entries in Kenner's proud action figure accessory tradition (see also: The Real Ghostbusters, Batman: The Dark Knight Collection) before realism and authenticity became job #1. This toy actually worked well as a toy, it slid right on the T-bar on Boba Fett's back and stayed on without the figure falling out. It looks like something out of a 1980s sketchbook, like it might have been a release during the original Return of the Jedi line.

The figure itself is basically a mishmash of the 1995 basic figure and the 1996 Shadows of the Empire version, only slightly taller. Had Kenner included the rifle, a basic backpack, and a cape, this would probably have been the best Boba Fett you could buy until the 300th Figure release in 2000. There are only 6 points of articulation, but hey, it's pretty good for what it aspired to be. I can't think of many reasons for your average collector to want this unless you're a big fan of Kenner's own creative designs, of which this is one of the better ones. Sure, it's goofy and unrealistic, but it does seem to fit the vocabulary of the look and feel of Star Wars somehow. In some respects I'm almost disappointed we didn't get to see more stuff like this, but hey, maybe some day those designers will open their sketchbooks to us so we can see what else was on tap.

Collector's Notes: This figure actually seemed to sell OK in its time, which is notable because I can't tell you anyone that was particularly happy to see it. But Boba Fett sells, and so did this one.

Goofy as heck, but if this was released today with a recolored clone trooper, many people would want one.