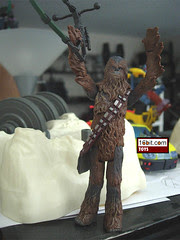 Bio: Chewie does his best to keep his friend Han out of trouble and uses his mechanical skills to repair the ever-malfunctioning Millennium Falcon. (Taken from the figure's cardback.)

Commentary: The mold for the Early Bird Chewbacca figure is a fan favorite, so it's no stunner that the mold would get repainted, this time with Hoth snow. This isn't the first time that this basic body mold has been given the Hoth treatment, a version with a different head was sold in a tin gift set in 2006-2007. But this one is different. How different? Not different enough that you should bother to buy both versions. The key difference is that this one has a different head and slightly less snow. If anything, this is the more subtle of the two, and arguably, it's in a better gift set. Also, it's cheaper. So how can you go wrong?

The figure's body uses the same legendary construction first seen in 2004 in the Vintage Original Trilogy Collection Chewbacca, which sported multiple waist joints and more than exceeded what most fans would call "super articulated." All the ball joints were there, and they're still here too. The only thing this figure really has going against it is redundancy. Since 1999 there have been no fewer than four snow-enhanced versions of the Wookiee, two of which share this basic body type. Given that Chewie was only out in the snow for a brief scene, it's a little much. Thankfully this figure's more subtle face and deco make it fit better as a Chewie for inside the Hoth hangar, rather than the one that goes out and blasts the probe droid. That's how specific it's getting now-- how wrong is that? If you have any of the vintage-body Chewbacca figures, you've basically got this one. There's nothing particularly special about it, other than it's another variation to add to your never-ending collection of figures based on a single character that never changed his outfit, which was little more than a belt and a purse in the first place.

Collector's Notes: The Battle Pack seems out of circulation, but these things come and go. If you have the means to get the set, it's better than the sum of its parts. Individually, this Chewbacca isn't anything special beyond it being another version of a special figure. Which, I suppose, does make it special.