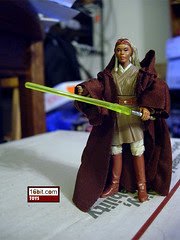 Bio: A skilled warrior, political advisor and healer, Stass Allie serves on the Jedi Council after her cousin and former master, Adi Gallia, is killed by General Grievous. She is leading a mop-up operation on the planet of Saleucami when Order 66 is issued. (Taken from the figure's cardback.)

Commentary: Who says fans don't get what they ask for? This Stass Allie updates a character that never really got a great release, but it's not like the 2005 version was all that bad. Now available with the best likeness so far and super articulation, really, there's no reason to go back to the well on this character unless there's a need for a cartoon version. It's unfortunate that as Hasbro has become more proficient at making a figure that'd make our heads spin a few years ago, the less remarkable these figures seem. Due to being an incredibly minor character, Stass wasn't exactly a fast seller, and her previous releases probably left some fans shrugging and saying "welp, already got her." It's not like this is a bad figure-- far from it. She can be posed in a variety of ways, and the overall detail is about as good as you can expect from Hasbro these days. Since she isn't an alien or a character with some level of recognition from the films, she ended up being little more than another reasonably obscure Jedi to add to your collection. A well-executed figure, just not one that's terribly exciting.

Collector's Notes: This figure shipped throughout Wave 4, and has not been mixed in to later assortments-- although Wave 4 has shipped for a while. Also, this figure was delayed from an early 2008 release, as Hasbro planned on including it with the first batch of 30th Anniversary Collection figures with stands at one point. This is also the third release of this character-- the first was Adi Gallia with a different name in an exclusive Jedi Council screen scene, and the second came with a bike as a deluxe 2005 Revenge of the Sith figure.

Email ThisBlogThis!Share to TwitterShare to FacebookShare to Pinterest
Labels: Jedi Knights, Revenge of the Sith, TLC