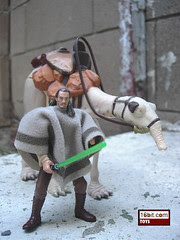 Bio: Riding atop an eopie, Qui-Gon Jinn hauls a T-14 hyperdrive generator to the outskirts of Mos Espa where the Queen's disabled Naboo Royal Starship waits to be repaired. (Taken from the figure's box.)

Commentary: It truly is amazing what becomes "collectible." At one time commanding as much as $120, this Qui-Gon Jinn with Eopie has gradually declined in value as people realized a) they don't like the prequels that much, and b) other, more exciting toys shipped out of Hasbro. The Qui-Gon figure in particular is nothing special, particularly when you compare it to the rest of the line. It has a button on the back of his belt which activates an "attack" action, like the deluxe figure. It has a removable cloth poncho, like the 2000 Power of the Jedi release. It has a green lightsaber... because they all do. Since this figure was paired with a fantastically rare creature, it did well. "Rare" is the key word, because the farting, feature-free Eopie isn't much of a toy, yet holds a certain legendary status because it was so hard to get. That doesn't mean it's any good, just that certain people didn't get it and whined and whined and now it's coming back out again. Minus one key thing-- the figure I'm reviewing here. A different version of Liam Neeson's character will be included instead.

This particular release was unique to this set. Qui-Gon was designed to sit on the Eopie, to stand and look normal, and to fight-- truly, no small feat for a figure with only 6 points of articulation and a button mechanism. If you take off his poncho, you'll note Hasbro wisely dropped the "skirt" below the belt for optimal articulation and the ability to sit on his creature companion. When his poncho is on, you won't notice it's gone. The outfit's sculpting is on par with the other versions from this era, which is to say it's a little bit more heroic in its proportions. Qui-Gon's face and eye paint are largely superior to others from the time, meaning this is one of the better looking Liam toys you can pick up-- assuming the lack of articulation isn't a problem. The cloth poncho is a nice touch,

Collector's Notes: This was the rarest Episode I toy that wasn't a bonus pit droid for quite some time-- it was, as far as can be told, never sold in the USA. Units in US packaging were sold in Japan, but with a sticker. These were also sold in the UK in multi-lingual packaging, which is where this sample came from. A new mail-in version is available now but the differences between the Qui-Gon figure are significant... the Eopie changes are unknown. Courtesy of this new release, odds are the 2000 original is on the fast track to worthlessness. Such is the collecting game.