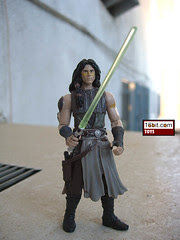 Bio: Quinlan Vos awakens with no memory of who or what he is, and immediately finds himself in peril, in the midst of a fierce blaze and attacked by bounty hunters. He is saved by Vilmarh Grahrk, who helps him escape and explains that bets are being placed on Quinlan's chances of survival. Villie reveals that he has a personal stake in the outcome, but changes his outlook when he sees Quinlan's Jedi skills in action. (Taken from the figure's cardback.)

Commentary: This was a winner of a fan's choice contest, but Hasbro already had it slated for production. Good thing it was in the comic pack, because the wave that the runner-up appeared in turned out to be somewhat rare. This Quinlan Vos figure, on the other hand, was pretty easy to come by due to it being shipped widely and for a long time, showing the value of the comic pack assortment. (Please don't ever take it from me, Hasbro.) While I can't say I'm the world's biggest fan of the character, he does look significantly more distinctive than most of the human Jedi from the films by virtue of his yellow paint stripe on his head and the unique body armor. His head is a little small-- or maybe the hair is too big-- but it's basically a good figure, with excellent arm articulation and virtually no leg articulation. The hips are jointed, but the holster when combined with his lower robes tends to prevent some level of movement, making this an-- as Hasbro's marketing once put it-- a "stand there and look good" figure rather than an "action" figure.

In and of itself, the figure is nothing special. The comic won't convince you to like it. If you stuck with Vos' storylines in the comic books you probably already own two of these. If you're not already a fan, this figure won't do much to make you one. The sculpting is good, the articulation is OK, but it's basically just some dude with funny hair and a lightsaber unless you have the personality to associate with it in your memory banks.

Collector's Notes: As values go, this was one of the better ones in the past few years. If for some reason you stumble on it-- and some stores are suddenly getting old inventory from the back, like what I'm seeing-- don't hesitate and BUY. This is a great figure if you're a fan of the comic character, which is to say, if you're someone that read comics between roughly 2000 and 2005. Since then, the character has been effectively dropped despite starring in several stories.