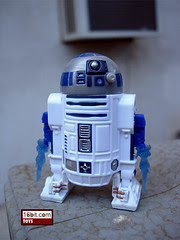 Bio: The spunky droid cannot sit idly by as events take place around him. He ventures into the droid foundries after Anakin and Padmé, followed by the protesting C-3PO. He uses his anti-grav boosters to stay clear of the dangerous machinery below. (Taken from the figure's packaging.)

Commentary: I first reviewed the original release of this R2-D2 2 years ago, just after this one was announced, assuming there would be no changes. Well, I was wrong-- arguably the worst R2-D2 of all time has now been made worse. It retains the body of the original release, but drops the bulk of the action features that would have made it interesting. By dropping the various string and magnet pieces, the figure goes from below par to downright crappy. You can't move his legs, but his feet have limited articulation. The dome spins, but has the most hideous deco of any R2-D2 action figure since the original line ended in the 1980s. It's just ugly-- if you put it in a lineup with other releases, you might even assume it was a knock-off. Why is his eye silver? Why don't the blast effects fit on the rockets as tightly as the original release? WHY, HASBRO?

To make this figure look even worse, it was packaged in a Battle Pack with some of Hasbro's finer efforts, including the best-available Anakin Skywalker, a really fun C-3PO with swappable limbs, a really slick Destroyer Droid, and a pretty good Jango Fett made of parts from previous figures. If you're an R2-D2 junkie, this figure absolutely qualifies for the "just different enough to make you mad" award. It just sucks. If you can avoid it, you might as well.

Collector's Notes: The set is worth the asking price-- this figure, is not. You can have a lot of fun with this set, but unfortunately everything that made this R2-D2 barely neat as it was didn't see the light of day here. The gift set is still available online, and can be had for $20 without too much fuss.