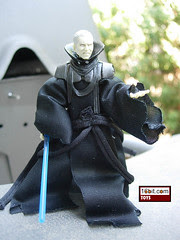 Bio: Luke Skywalker has discovered the existence of another Jedi, helping him further his goal of reestablishing the Jedi Knights. While he makes plans to go to Ossus to locate important Jedi artifacts, Emperor Palpatine is reborn in the body of another clone, and he makes immediate plans to crush the Alliance and the fledgling Jedi Knight. (Taken from the figure's cardback.)

Commentary: While few fans were actively begging for a new Clone Emperor Palpatine figure, Hasbro went ahead and did one. And they did a freaking amazing job, too. The 1998 release was pretty good, but this one ups the ante by tacking on tons of articulation, lots of accessories, and a fully realized costume underneath the main costume. You don't get that often. Were this figure released as a basic carded release, odds are Hasbro wouldn't have packed so much stuff with him. It's really a good use of the comic pack format, including extra bits and pieces in addition to a comic book reprint.

Under the cloak is a creepy decaying old man with blue liver spots and presumably some form of electrical tape. (Kinky.) The coloring on the skin really does look like it came out of a comic book, with big blue and greenish circles that give the key villain of the franchise an especially otherworldly look. The design benefitted from a few years of information, for example, what Palpatine looked like when he was younger. The stylized comic art of Cam Kennedy can be interpreted in a variety of ways, and it's good to see Hasbro not making chunky, literal interpretations of the characters but rather take a few colors here and a costume there while synthesizing something that would look more at home in the modern movie-styled line. You know, like what they didn't do with Tobbi and Fenn.

This figure is a very nicely done release and an example of how far Hasbro has come since 1998. That original Clone Palpatine was a high mark for a lot of us, so seeing a release like this incorporate soft goods and plastic armor in new and interesting ways shows that Hasbro actually not only learned a whole lot about how to do the line even better, but has the power to surprise us.

Collector's Notes: This one seems to be done for now-- if you missed it, go get it. Hasbro has been good about rereleasing a number of comic packs as they go forward, so you might have a chance to get one in new packaging down the road. I wouldn't assume that you would, of course, so go ahead and grab this one if you see it.