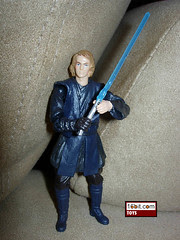 Bio: The Separatists have kidnapped Chancellor Palpatine and are fleeing Coruscant with their hostage. Boarding the enemy vessel, Anakin and Obi-Wan battle their way to the Chancellor and are challenged by Count Dooku, who is eager for another lightsaber duel with the two Jedi. Dooku defeats Obi-Wan, but is overpowered by Anakin when the chancellor urges young Skywalker to use the power of the dark side. (Taken from the figure's cardback.)

Commentary: While I initially embraced the Marvel-deco figures as a sort of bizarre, pop-arty, quasi urban vinyl take on my favorite toy line, that's because it was Marvel. And with Marvel, you were looking at the cheap printing technology of 1977-1985, which often resulted in vibrant colors and some interesting coloring errors. With Dark Horse, what you're getting is less the technology driving the look than the appearance being pretty solid-- if it's a movie adaptation, odds are it's going to look a lot like the movie. This Anakin Skywalker figure is based on the Revenge of the Sith comics, but if you didn't know any better you might assume it's a movie figure.

Rather than being dark brown, the figure's costume is now a black and blue hue. He retains all the mechanisms of the 2005 basic carded version of this figure, which includes a slashing action when you squeeze his legs and a right hand you can pop off. Normally, there were alternate hands, but this release dropped those. The blacker costume Anakin is sort of neat and fits in nicely with the concept drawings, but now that we have an actual concept Anakin figure there really isn't much use for this one other than being a curiosity. Although for kids, packaging a lead hero and villain together for $12 with a comic book is a great idea, it's just that neither of the two figures are particularly enticing for collectors unless this somehow pushes one of your buttons. If the colors were wackier, I might be more excited.

Collector's Notes: As always Wal-Mart's distribution varies by store-- not even by region-- so it's possible you were drowning in these, or you never saw them. I haven't seen one for sale lately but I had numerous opportunities to score these in my toy hunts during 2008, so I wouldn't suggest paying a premium for it.

I say the darker costume coloring on this Anakin more-definitively emphasizes his descent toward the dark side in ROTS. It's more distinct when compared with any AOTC Anakin. I don't think the 2005 ROTS Anakins were painted dark enough, so this Comic Pack version was a must-have for me. Too bad he didn't come with a soft-goods cloak.