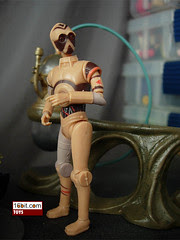 Commentary: Figures like TC-70 are proof positive that Hasbro ain't stupid. Within about 6 months of making C-3PO, the same mold was trotted out for another protocol droid, which is one fans were asking for anyway. Hooray!

The figure is almost exactly the same as C-3PO, except for the coloring. The same 14 or so joints are present so he can sit, stand, gesture, tilt his head, and otherwise emote through the use of his plastic parts. While the coloring seems a little brighter than the movie, you still get the feeling it's a droid that has seen some abuse, as seen by the various replacement parts on his chassis. The sculpt feels like a protocol droid, it looks like one, really, there's not too much to say here beyond that Hasbro did an admirable job replicating a fairly minor character from a movie that, by most box office standards, flopped. I'm quite glad to have it because the mold is a good one, I love cartoony things, and it's also from Jabba's palace. If you think you might appreciate this one, let me assure you, you will.

Collector's Notes: This is a new-ish release, packaged a little heavier than other Battle Packs and also apparently not being as popular. As such, you should be able to find one without considerable difficulty. Due to the quality of the Jabba figure, I'd suggest you do so if you're a toy fan. Hasbro finally made a top-notch hutt, which we'll look at in the future.

I initially wanted this Battle Pack just for TC-70, given her highly unusual decor, but then, when I saw Jabba, the deal was sealed. I'd never purchased a Jabba before, and this one, with its half-closed eye, swept me right back to opening day of ROTJ. I couldn't resist.

I too was pleased with this figure, and it was a smart (and cheap) addition to the Jabba set -- which was, as you say, Adam, a great set; I think it would have sold better were it not for the weird anti-cartoon bias some collectors seem to have. I would have loved to get the Nikto guard as well, but I'm sure we will at some point.