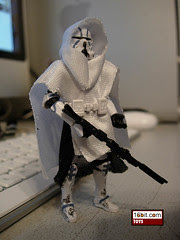 Bio: The Clone Wars are over. The Galactic Republic army is defeated, and Order 66 has eliminated most of the Jedi or forced them into hiding. Wild rumors are spreading that the Jedi tried to overthrow the government and cannot be trusted. On the planet Toola in the Outer Rim, Commander Keller is hunting down two fugitive Jedi who survived Order 66. With the help of a Galactic Marine, Keller tracks them through the deep snow as they head toward Ithaqua Station. (Taken from the figure's cardback.)

Commentary: One of very few figures to grab people at the end of the run of Republic was Commander Keller, leader of a squad of cold-assault Clone Troopers. This figure is a real mishmash of others, with the bulk of the figure having been previously used as the various Airborne Clone Troopers. Hasbro added a different belt and some cloth elements, and the end result is one of the best arguments for the constant reuse of molds. The helmet comes off, the rifle is rifletastic, and there's a fair amount of deco under his garments which, most likely, you will never see. As super-articulated figures go, this one won't do much to surprise you, but it is a well-constructed figure. I mean, it can sit thanks to the cloth parts, so that's a step in the right direction.

So far, no other figures have recycled this specific construction. There are several figures that use this body mold and helmet, but as to the cloth bits, they're exclusive to this release. So far. For all I know Hasbro has announced another Clone Trooper repaint collection and this one's in it and black, if you're reading this far enough into the future.

Collector's Notes: This one's long gone, but thanks to the glut of new product you can get this one on eBay at or below the issue price. $13 or so shipped is very doable.

Congrats on 1,100, Adam. Also, Keller was a no-brainer for me in terms of deciding to purchase him (and the Galactic Marine) on the spot. I loved the deco.

This is 'hands down' my favorite clone commander. The soft goods are the real selling point. The fact that it came with a matching Galactic Marine made it even better. I really hope Hasbro does recolor this figure for more characters.