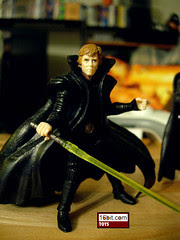 Bio: Luke Skywalker has discovered the existence of another Jedi, helping him further his goal of reestablishing the Jedi Knights. While he makes plans to go to Ossus to locate important Jedi artifacts, Emperor Palpatine is reborn in the body of another clone, and he makes immediate plans to crush the Alliance and the fledgling Jedi Knight. (Taken from the figure's cardback.)

Commentary: One of the first figures I did for this column was Luke Skywalker from the first Dark Empire series, which I assumed they would never revisit in any form. And here we are! Colored differently and completely resculpted, the now-aging Jedi Master was represented as a much more action-packed figure, which is really out of character for the modern era. The crazy flowing capes and blowing robes were very 2002, so it was surprising to see the style repeated here. The giant cape piece is removable by sliding it over Luke's arms, although the figure looks extremely dull without it. As such, I suggest you leave it on.

This is a figure that really doesn't benefit from its super-articulated frame. What good are 14 points of articulation if a garment prevents the figure from taking advantage of these extra pieces? Hasbro's design for Luke makes a better statue than a toy, which is too bad because cloth robes or perhaps a slightly more understated piece would allow the figure to look good in anything but an action pose. Also, the resulting figure is unusually wide, making it tricky to store in most carry cases. Thankfully it looks good, with a slightly older looking face and lots of rings sculpted around his costume. He certainly looks like someone who could take down an AT-AT with the Force, which is good, because that stuff goes down in the comics.

Collector's Notes: Love Dark Empire? Well, here ya go. This is probably as good as the outfit will look in terms of modern sculpting, but I really do prefer the original release with its stylized lightsaber, blue highlights, and far stranger hair. Oh, and a less insane pose for his robes, that's a plus. Still, it's nice, and you can probably still find it at retail if you look hard enough.