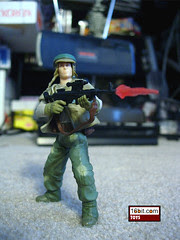 Bio: When Han Solo, Leia Organa and Luke Skywalker land on the forest moon of Endor to destroy the shield generator protecting the Death Star II, they are accompanied by a squadron of commandos. Loyal and courageous, these soldiers are inteprid fighters for the cause of the Rebellion. (Taken from the figure's cardback.)

Commentary: A few years ago, Hasbro was really crazy about the idea of making a figure and selling it twice-- changing the head makes it new! Lately they've come out saying this was going to be less and less common, and while we're still seeing it, this Endor Rebel Soldier was one of the first times Hasbro actually got the variant to market. (The Power of the Jedi head sculpt variants wouldn't hit until 2003.) This beardless trooper is based on a Hasbro employee-- but who? I still haven't got an answer, although I've had a hunch as to who it might be for a while. (He denies it.)

The figure shares the same body as the bearded version, right down to the sculpted jacket hanging over the body which obstructs shoulder movement. The swivel elbows were fairly useful, as were the jointed wrists, but ultimately this figure is more of a statue than a toy. With the two-handed rifle, there's really not much he can do other than be posed aiming his rifle, which is good for army builders but if all you want is one really awesome Endor Rebel Soldier, well, Hasbro still hasn't quite perfected it yet. Maybe we'll see something in 2011.

Collector's Notes: Despite not being great, Hasbro used this body to make various figures. At least 4 Endor Rebels (including this one) share the same upper body, as does the Battlefront Rebel Vanguard Trooper. This figure has not yet been repackaged.

Email ThisBlogThis!Share to TwitterShare to FacebookShare to Pinterest
Labels: Rebellion, Return of the Jedi, Saga