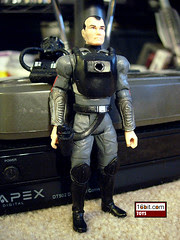 Bio: Rogue Squadron is sent to Brentaal IV, an important trading planet held by Imperial forces. The elite squadron's mission is to take control of the planet, but to do that they will have to defeat Baron Fel's formidable 181st Imperial Squadron - no easy task even for "Hobbie" Klivian and the other ace pilots in Rogue Squadron. Unknown to them, they are being used by bickering Imperial forces in a devious plot to consolidate their power. (Taken from the figure's cardback.)

Commentary: One of the more popular characters among fans of Star Wars fiction is Baron Fel, one of few TIE fighter pilots to get a name and any sort of fame. The character defected to the Republic/Rebellion/whatever after Return of the Jedi, and ultimately, eventually, went back and his descendants became the new rulers of a new Empire. But that's way off.

This figure is based loosely on one of the characters' first appearances, which is why he looks a little wonky. This isn't a standard TIE Fighter Pilot outfit, nor is it a Rebel Pilot outfit. (So for those keeping track, there are two new versions of Fel Hasbro can crank out without too much work.) The figure is missing his trademark facial hair, and his proportions were very strange for a 2007 figure. He was a little chunkier and bulkier than he needed to be, but at least he exists, right? A working holster is a nice touch, but this figure basically went straight into the storage boxes after I got it because I just don't like the costume. If Hasbro just popped a new head on an existing body, I'd be thrilled-- hopefully now that we have the perfect TIE pilot body, we can get one some day down the road.

Excepting his ankles, this figure is quite close to being super articulated with a grand total of 12 joints. Not bad, considering you got two figures for $10 with a comic book when you bought this at its issue price.

Collector's Notes: None of this figure has been reused to make another figure yet, and it has never been reissued. But don't worry, you can buy the packaged set on eBay for about $11 shipped, which is less than it would cost you reissued.

The character seems decent, but I didn't like this figure, too tall, too bulky and the outfit was too EU. His packmate mostly sucked, too. I regret buying the set.

I thought it was strange that they didn't give him the goatee. Without that or without being in a regular TIE pilot uniform, he does look peculiar. Even if the TIE pilot uniform were painted differently. As for the Hobbie figure, I thought he was terrific and looked a good deal like the movie version of that pilot ("Two fighters against a Star Destroyer?!" That was character, right?) Anyway, I liked it!

I thought this was a great deal, and I bought 3! The Hobbies added generic pilots to my battle of Yavin briefing/hanger deck diorama, and the Baron's TIE helmets and armor went to the 3 headsculpt variations of those bad jumpsiut Imperial officer figures, instantly converting them to great pilot figures in the process of suiting up. 2 grey coverall Barons became clone technicians working on Vader's Tie Fighter, and I sold the other one on Ebay. It's unusual to find a comic pack that's so useful!

I bought the Comic Pack just to have Hobbie, who I remember from TESB. I don't know who this "Baron" cat is.