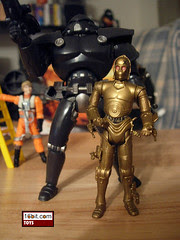 Commentary: One element of the appeal of build-a-droids is that in some respects, they don't quite exist. Sure, I have a C-3PX in my toy box, but you can't go out and specifically buy one-- you have to pick up several other sets to put it together, which in 2008 would have cost you about $60. Several two-packs were released, each with a different piece, and the entire set is really quite good. C-3PX was the only figure in the collection to be made of entirely new parts. He is indeed super-articulated, and even has a ball-jointed head that didn't quite work. The head itself is a little small, and it feels like the round peg puffs it out a bit. Still, it's an awesome release in that it's a non-chrome C-3PO-esque droid (fairly unusual) with red eyes and tons of guns, and numerous faux panels which hang open with these blasters poking out. Truly, it's the most violent version of the least violent character of the original trilogy.

While not perfect-- the head does look funky-- this is as good a C-3PX as you're likely to ever see. The eyes are red, the big "X" is on his face plate, and of course he's heavily armed. Heck, you can give him a gun to hold if you want, but one was not included. As Hasbro's very first build-a-figure in Star Wars, this figure spawned quite a legacy which would go on to include the likes of HK-47, R7-T1, MB-RA7, and many others. Just remember that the parts don't quite fit as well with subsequent droids if you're looking to swap them around.

Collector's Notes: The character has been retconned into the point of ridiculousness (built by Darth Maul?) by the RPG and Scholastic program (both of which are largely ignored), but the figure is still pretty good. If you only know him from Droids #3, all the better. The entire figure on eBay should set you back $15-$20, with each part coming in at about $5. Overall, you're probably best served buying the collection of six two-packs. According to people I talked with inside Kenner in the 1990s, the figure "Attack C-3PO" (solicited in 1996 and never produced) was planned to be C-3PX before being rejected by Lucasfilm.