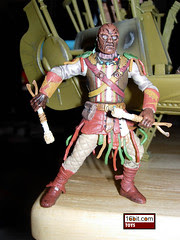 Bio: Ak-Rev is one of the drummers in the band that provides musical entertainment for Jabba in the Hutt’s palace court. The Weequay’s serious demeanor hides an angry nature; he’s always ready for a fight. Along with fellow drummer Umpass-stay, Ak-rev survives the debacle at the Pit of Carkoon. (Taken from the figure's cardback.)

Commentary: I like to think that Ak-Rev is a sign that fans are really, really gullible. In 2007, Hasbro released Umpass-Stay, a drummer with only one half of the drum. Fans asked Hasbro when the companion would come out, Hasbro remained coy, and fans on the forums actually went along with it. Do you people really think Hasbro would only release half of an accessory and never finish the job or say something like "just buy two?" Geez. Whatever, man.

Hasbro left knees off of this one, but failing that, there are 12 joints here to allow for a number of musical poses. The body itself has a lot of detail on it, but the neck seems a little too prominent and the resulting figure looks a little goofy. It's a very colorful figure with exceedingly bright eyes, but as a background character, you can't go wrong really. Take a look at the shoulder pads, the fringe, and the striped shirt and tell me that this guy wouldn't make a good pirate or, perhaps, a refugee from the Renaissance Faire. Still, Jabba's Palace aliens are few and far between so overall I have to say that this is a pretty good figure. Since it's not from the original cut of the film, nor is it perfect, I'd say that it isn't a must-buy unless you want the entire band and a complete drum. I would rank it as "good enough"-- better than no Ak-Rev, but hardly an impressive release compared to the other figures that shipped with him around the same time.

Collector's Notes: This one seemed to sell OK in some markets and slower in others. By now he's generally worked his way through the system, so you aren't too likely to stumble on him.