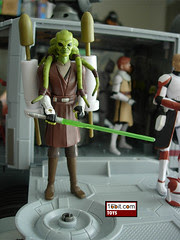 Bio: This Jedi Master belongs to the amphibious Nautolan species that can live comfortably in air or water. He has mastered difficult Jedi techniques that manipulate the movement of water for combat purposes. To aid him further in battle, he sometimes uses an underwater propulsion backpack.

Commentary: Styled much like other animated Jedi, this Kit Fisto figure has the increasingly familiar suite of articulation-- elbows, wrists, shoulders, neck, waist, and hips. No knees, no ankles. It's an entirely new sculpt and is posed in a fairly neutral pose, which is typically the look that a lot of collectors ask for. The skirt is flexible enough for the figure to sit without too much trouble, and the backpack fits right under the hair. Er, tentacles. Whatever those things are.

Much like on the cartoon, this figure sports scavenged Clone armor, Jedi robes, and very colorful deco. The rich brown robes are offset nicely by the green spotted skin, the boots and pants are unique colors, and the rocket pack... kinda sucks. It's easy to accidentally set off due to the flick-firing spring-loaded mechanism, so I had to go digging for these in the couch a few times. The figure's smile and big black eyes make it look better than nearly all previous releases of the Jedi master, so it's easily one of the best despite not having the best articulation. It's significantly better than the Revenge of the Sith version, and while the Geonosis version may be better-- I don't have one at press time-- I don't think I'm going out on a limb by saying this is Hasbro's best Kit Fisto yet.

Collector's Notes: This is the first Kit Fisto from the CG-animated series, but not the first one based on a cartoon. It will be available in blue and the new red packaging, and maybe something else in the future. Who knows?