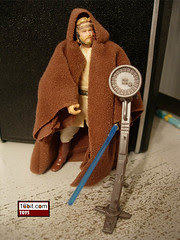 Bio: Obi-Wan Kenobi is sent to Kamino by the Jedi Council to discover who is behind an assassination attempt. Piloting the Jedi Starfighter, Obi-Wan discovers an industrial facility in which a stunning cultivation is underway - one that may decide the fate of the encroaching civil war. (Taken from the figure's cardback.)

Commentary: Looking back on some figures in this column brings both feelings of delight and frustration. This Obi-Wan Kenobi figure in particular does both, showing us just how much more stuff Hasbro gave us with a figure at a lower price just a few short years ago. The figure itself will likely not impress you by current standards, The sculpt is pretty good, and the likeness was one of the better ones in 2002. The figure's look turned out pretty nicely, and this was despite having a seemingly completely unnecessary action feature. If you pressed a button on the back of his belt, he'd slash his lightsaber with both hands. He also had a magnet for holding the weapon, which I really liked, but I'm a sucker for magnet-based play features. Were it not for the headgear communications equipment, this would probably have been one of the better-overall Obi-Wan figures to come out of the second prequel. The non-removable gear may be an eyesore, but Hasbro found a way around that with a head swap a few years later.

As far as accessories and toy synergy goes, this figure impresses. Not only does it include a cloth cloak, but it sports a radar dish which plugs into a hole on the Jedi Starfighter released months earlier. There's also a stand for the dish if you don't have the ship, and a really tiny pair of binoculars. Like, it's so small, you'll probably lose it and forget you had it in the first place. Obi-Wan can't exactly look through them due to his limited articulation, but at least he has no problem swinging his lightsaber. The most interesting extra in this set was, to me, that dish. In 2002 Hasbro spent a lot of time designing its toys to connect to other toys-- playsets connected to deluxe figures, and figure accessories plugged into ships. It was a good idea. Despite having released multiple Jedi Starfighters over the years, this was the only instance of the radar dish seeing release. So you can't exactly easily deck out your armada with the accessory if you wanted to, but absolutely no fans seemed to care about this fact. It's interesting to see what does and doesn't set us off as a group, as we were crazy about Republic Gunship gun pods, but the dish? Total indifference. (I thought it was cool.)

Collector's Notes: This figure was essentially a one-timer, it was repackaged as a Kay-Bee exclusive with the Jedi Starfighter shortly after its release with no changes. In 2005, the body was recycled with a new head to make a less piloty Obi-Wan in the Jedi vs. Separatists Battle Pack.

I was looking through my Saga-1 figures recently and was surprised by how lightly colored Obi-Wan's hair and beard were. More-recent versions of Kenobi have corrected the error, of course, thereby rendering the Saga-1 versions obsolete (for me).