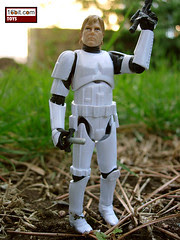 Bio: Hondo Karr was a blond Human male. He was a stormtrooper assigned to Joker Squad. However he later defected to the Galactic Alliance Remnant. (Stolen from Wookieepedia.)

Image: On a TV tray.

Commentary: Few characters have so much figure potential after so few appearances. Based on the Legacy comics, Hondo Karr first appeared as a stormtrooper, and his squad mates said he might be an ex-Mandalorian. If that wasn't enough, he defects to the Alliance after the events of his first appearance, plus the figure includes both a knife and a mullet. If you don't already like Hondo Karr as a concept, well, what am I supposed to tell you?

The body itself is basically the modified Vintage 2004 sculpt, with a new head and some slight deco modifications like a white holster. The blaster doesn't quite fit into the holster, and there's a lot of debate as to what a Legacy trooper should look like. The artwork is anything but consistent, but it seems that it's basically a mishmash between Clone and Stormtrooper parts, but some artists show them as similar to trilogy-era Stormtroopers. So either it's right, or it's very wrong. Hasbro did what made the most sense for their budgets, and the figure works as a "future" or "modern" Stormtrooper. The best thing about this guy, if you ask me, was an unintentional feature you can only see when you try to put his helmet on. This figure has a mullet, and it hangs out the back of his headgear. I think that's pretty fantastic, because it's just so sloppy and out of character with the generally less hairy line. Typically, you don't have chunks of the character spilling out of the costume, but here you go.

And yeah, he does look a fair amount like Luke, doesn't he? At the smaller size, one really needs to exaggerate features, because White Blonde Dude is pretty much always going to kinda sorta look like Luke unless significant changes are made. The spiky hair seen in the comic didn't make the transition to the action figure, largely because it probably wouldn't fit under the helmet. Ah well.

Collector's Notes: This figure comes with 5 others in the Joker Squad set, which is currently exclusive to Entertainment Earth. The story of the squad appears in Legacy #4.