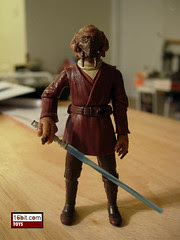 Commentary: This is a repaint of the 2005 Plo Koon, but it looks a little softer and slightly more alive than the original release. Also issued on a Saga Legends cardback, this particular Plo Koon is pretty sharp. The articulation won't likely impress, but it's pretty good. The leg joints are surprisingly awkward given when it came out, as the knee and boot articulation varies on each leg. Usually you get the same kind of joints on each limb, but not so here-- one rotates at the boot, the other, at the knee. My guess is that someone decided not to do a good job that day. he has cut joint elbows, normal wrists, and a lightsaber. In short, it's a good basic figure, but certainly not an impressive one. Because of the aforementioned weird construction it sort of sticks out like a sore thumb against other prequel Jedi figures, so if you can wait for the next one, go ahead and do that.

Collector's Notes: Once a very cheap $10, you can probably now get this for less than that, particularly as part of a lot on eBay. A super-articulated Plo Koon is coming soon, though, so while this is the best one you can get today an even better one is just around the corner if you can wait.