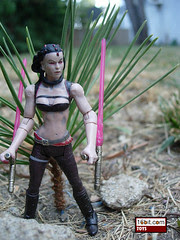 Bio: Maris Brood is a Padawan who escaped Order 66 and has been in hiding with Jedi Master Shaak Ti on Felucia. When she is violently separated from her Master, her impetuous and angry nature leaves her vulnerable to the influence of the dark side.(Taken from the figure's cardback.)

Commentary: She's not a Sith... right? The fine line between good and bad was blurred in The Force Unleashed throughout the entire story, and this evil looking chick was the apprentice of Shaak Ti, who apparently did not actually die in either of the two filmed (but deleted) deaths in Revenge of the Sith but rather fought to make it to Felucia. Where Darth Vader's apprentice did the job. Anyway, Maris was with her and was being trained as a tool of vengeance against Darth Vader, which brings us to how she looks now. Apparently while in the wilds of the jungle, your pants hold up nicely but get tighter while your top shrinks to a glorified ace bandage. Bless the perils of war.

Hasbro Star Wars women with super-articulated arms are all over the place, thankfully this one's arms don't look too manly, despite being as thick as or maybe even thicker than her legs. It's important to have that kind of motion, because tonfa lightsabers look dorky if you can't get decent arm motion out of your toys. She has a waist joint at the bottom of her top, which is a good place to put it in order to avoid disrupting the look of the figure. Always use the seams! She has red fingernails, multiple belts, "dark side" eyes, and just a smidge of lipstick, which really helps identify a character as female at this small size. While she has no knee joints, she does have ankles which help to pose her on a display stand or shelf. Oh, and she can sit without real problems. In short, it's a pretty great figure. If you're a fan of the game, put this toy on your wish list.

Collector's Notes: A one-timer (so far), this figure could make a return appearance in the next year given the game is being reissued and the rumor mill indicates some boxed sets based on the video game are in the works. As Hasbro is fond of recycling existing figures, it wouldn't stun me to see her again. Also, the prototype of this figure shown at 2007 Toy Fair in New York had green lightsabers. Obviously, only red were released. Variant hunters, take note: there's a very minor skin tone change, one looks greyer than the other. The is the less-grey version.